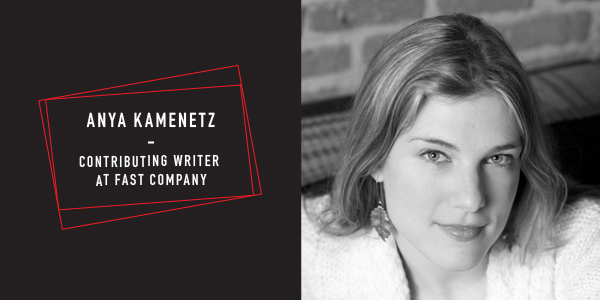 There are a few journalists whose columns occasionally set off lightbulbs in my head and I think, “They’re on my wavelength!”

Anya Kamenetz is one of them. She usually writes for Fast Company.

Not too long ago, she did an article about the sharing economy’s impact on workers and asked for my thoughts.

Her areas of interest are broad and deep: technology, sustainability, social entrepreneurship and the future of learning. She also has her own newsletter.

I thought it would be interesting to turn the tables and see what she thinks about these new economy issues.

**Sara Horowitz: With all of the business activity on the sharing/peer part of the economy, I notice some criticisms bubbling up. **There's the traditional critique from the Left, which is, "What about the workers?"—I'm thinking of your Fast Company article here. And there’s another critique which is, "Where do the profits go?" As in, the profits go back to a small group of owners or investors, instead of going to the people who are on those platforms doing all the "sharing.”

Maybe we should be thinking about new types of ownership. I'd love to hear your thoughts on that.

First, there are all these people creating platforms like Facebook and Twitter, and you can get very rich by making that platform, even though the value is created entirely by your users.

The sharing economy is a very natural next step in Silicon Valley thinking. You see an "excess in capacity"—in this case, in people's houses and cars and things like that—and you can create another large successful businesses by saying, "You don't make the stuff, and you don't ship the stuff, and you don't move the stuff around, but what you do is make a place for other people to do those things, and you take your cut, and that's a really wonderful business idea. "

That's one way of looking at the sharing economy, as the prototypical Web 2.0 success story.

Sara: Exactly. And that's the view that I see most often. But I can't help taking a different view, which you and I have talked about before.

Anya: The other way of looking at the sharing economy is in that tradition of shared value created by the people that are using it. This has political antecedents in co-operatives and unions and anything else that's not just pure capitalism where the guys at the top get all the benefits.

So what happens is that a lot of that feel-good rhetoric from the second sense of the idea gets grafted onto the first sense. And that's where you've got companies like Airbnb, where a lot of the branding is around connecting people, enabling sharing and trust and feeling good.

But when it comes to who actually is benefitting, and if this vision of benefits is fair, that remains an open question and varies from instance to instance.

Sara: What I find compelling is, what if freelancers got together and started creating their own kinds of businesses. And what if there was some kind of vehicle by which they would not only get paid for the work that they do, but they would also have some sense of shared ownership?

That would be the thing to learn from these groups. It would be like if we could get a platform and a cooperative to mate.

Anya: It sounds like your question really is, how does a platform “co-operatize” itself, or how does a co-operative “platformize” itself?

For this, it's really interesting to look at open-source software, where we do have examples of collectively created value that is owned cooperatively. But the instances in which they’re successful are pretty small, actually. How does a platform “co-operatize” itself, or how does a co-operative “platformize” itself?

There’s Firefox and Linux, open-source and created collectively by a small circle of designers, and then they came to dominate the platform. That doesn’t seem so “mutual.”

I don’t know how you get to a situation where the best designers work for that collective, as opposed to just working for a regular startup.

Sara: I think it’s because we don’t really have any organizing institutions. Let's say you start to have institutions like Freelancers Union, or others that are community or nonprofit oriented. They actually can hire or bring together this high-quality group of people, and then you’re using community resources in a smart and organized way. It doesn’t have to be so ad hoc.

Anya: You’re talking about aggregating demand on a large scale. And I think we're seeing kind of isolated instances, like the fast-food workers strikes. Although they’re not represented by a union.

Sara: When I think of my favorite time in labor history, it’s probably the 1920s, where these unions put together real business models. They started their own insurance companies, housing and summer vacation places.

Those institutions played an anchoring role for the broader economy, and that’s what I’m not seeing here. Where are the actors coming into the market for the benefit of a set group of people?

Anya: I read this smart column the other day saying, basically, that income inequality in America is bad for everyone. It’s bad for society, it's bad for our health, it makes it hard for the economy to recover, and then it makes our cities less good places to live.

So these fast-food workers are doing everybody a favor by trying to ask for a raise in wage. It's not something the companies are going to do on their own. It really takes a group effort to force them to be in that position. That’s something that’s missing right now in the market ecosystem.

**Sara: Right. Not to keep bringing up the example of freelancers, but it’s one I know. We set up these medical homes that actually deliver care in the way that people want to get it. But the way that we can do it is because we have enough people in our group. **

I’m glad you brought up the idea of an ecosystem. Because I feel like this is like those marshes, where those trees have deep roots and they keep the water in one place. But you need enough trees. If you start removing them, forget it. Flooding.

Anya: In the wetlands in Louisiana, where I'm from, they slow down the extremes of tidal movement and mitigate the effects of sudden flooding. And I think that’s kind of what we're talking about, right? Moderating and mitigating the effects of the "unfettered marketplace," which is actually a pretty biased marketplace.

Sara: So, we just have to figure out how to do that in a human way.