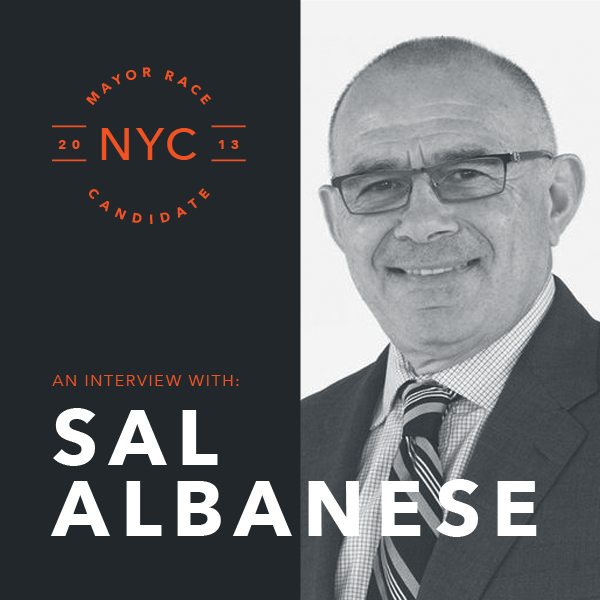 Sal Albanese is a Democratic candidate for Mayor of New York City. To learn more about Sal Albanese, visit his website. His responses are below.

I came here as a working-class immigrant when I was eight years old. The services that the city provided helped elevate my family from the working class to the middle class.

I’m running for Mayor because I want future generations to have the same opportunities that I had, but I’m worried that our dysfunctional government is letting them slip away.

I spent 11 years as a public school, 15 years as a reformer on the City Council, and 15 years in the private sector.

That kind of broad-based experience and political independence is exactly what we need to make New York City a better place to do business, get an education, and raise a family.

Freelancing is a driving force in the new New York City economy. From reporters to designers to lawyers, they are providing services and adding value to the lives of our citizens in ways many people have yet to grasp. As our economy evolves, a skyrocketing number of New Yorkers are finding opportunity in the independent sector. In the process, though, they are often denied the basic job benefits and worker protections that traditional employees enjoy.

In my fifteen years as a New York City Council member, I worked closely with freelancers, including the Freelancers Union, to expand protections for independent workers. As a candidate, I’ve spent much of my time at events like New York Tech Day, hearing firsthand from independent workers about what they need from the city to put down roots, grow, and thrive in the five boroughs.

The single biggest obstacle standing in the way of entrepreneurial growth in New York City is our dysfunctional government. The political class is so indebted to special interests that it can only react to, instead of lay the foundation for, a changing economy. I’m proud to not be accepting contributions from developers and lobbyists so that I can be liberated to make decisions on the merits. To streamline services for tech entrepreneurs, I’ll appoint a new Deputy Mayor for Technology. To cut bureaucratic red tape, I’ll direct my EDC to focus on startups and small businesses, rather than simply wooing major corporations. To remove the obstacles that stand in the way of so many entrepreneurs, I’ll drag city agencies into the 21st century with online licensing and permitting so creative New Yorkers aren’t forced to sit on their hands and wait for approval to start growing their businesses.

With nearly 50 million Americans working as freelancers, it’s absurd that federal, state, and local governments wouldn’t commission regular studies of the independent workforce. Without taking an in-depth, scientific look at freelancers, policymakers are writing legislation with at least one-third of the population automatically left out. As Mayor, I would most certainly support a comprehensive survey of NYC freelancers to ensure that we fully understand their impact and the impact of city policies on their businesses.

I’m a staunch opponent of the slashes to our social safety net that have left millions of Americans, freelancers included, hanging on to their livelihoods by a thread. In addition to strengthening unemployment insurance, we have to get creative. As Mayor, I would work with state legislators and Council members to craft a pre-tax Independent Unemployment Program in which freelancers could invest while employed and use while unemployed to bridge the revenue gap between contracts.

While providing stability is key, nothing would go further in meeting that goal than to focus on the fundamentals. That is why, as your next Mayor, I’ll build or preserve 210,000 units of affordable housing, expand the city’s Living Wage law, and fix our schools so that the future freelancers have the skills they need to succeed in our economy’s newest sectors.

Since I launched my campaign for Mayor, I’ve been privileged to visit several coworking spaces and mutual aid groups. From digitalizing more city data for entrepreneurs to access to offering tax incentives and zoning changes to provide room for entrepreneurs to grow their businesses in the neighborhoods they call home, I’ll embrace these new economic and social models to foster private sector growth and improve the delivery of government services.

**Thanks to Sal Albanese for answering our questions. If you need more info on how or where to vote, check out NYC.gov's voting resources. Please remember to vote on September 10! **