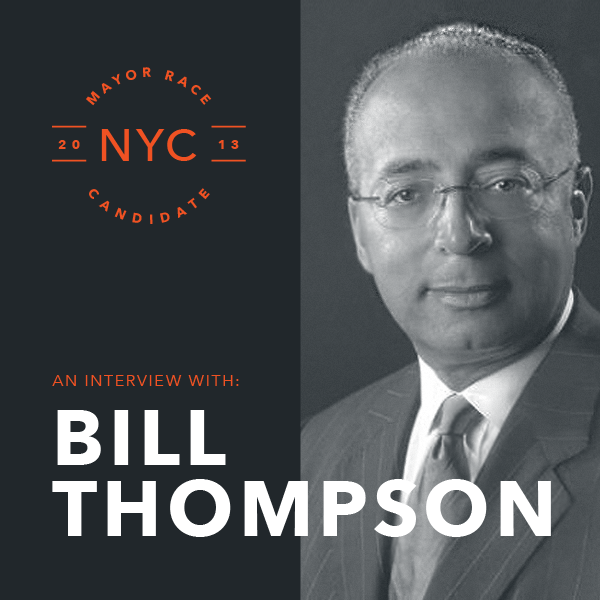 Bill Thompson is a Democratic candidate for Mayor of New York City. To learn more about Bill Thompson, visit his website. His responses are below.

I served as the Comptroller of New York City from 2002 through 2009 where I was responsible for managing the finances of the country’s largest municipality and supervised a staff of more than 700 professionals. As the City’s top financial watchdog, I oversaw the City’s $100 billion pension.

I am a proud product of New York City’s public schools. I served as the head of the Board of Education for five terms; I oversaw a school system with 1.1 million students and 130,000 employees. In addition to my eight years of service as a citywide executive, I have valuable private sector experience.

After a lifetime living in Brooklyn, I now live in Harlem with my wife Elsie McCabe Thompson and two step children. I am the proud father of a grown daughter, Jennifer.

Freelancers play an important role to our City’s economy. Freelancers provide companies a pool of talented workers that can be utilized to help them grow and prosper. Also, freelancers are vital to our arts. New York City is home to the fashion industry, thousands of museums, film and television industry, freelancers make up a big percentage of the workers of these industries which are vital to our economy. As a City we should do everything possible to make sure that freelancers are able to succeed because they provide valuable work and are an important boon to our local economy.

Unfortunately, the National Labor Relations Act did not provide enough legal protections for Independent Contractors. Given the rise of temporary workers, permanent temporary workers and independent contractors, our City has to find ways to provide legal protections for these hardworking individuals. Also, as a City we want our self-employed and entrepreneurs to be able to succeed because their growth means more jobs and revenue for our City.

As Mayor I will propose for the Office of Small Business Services to establish events and programs for freelancers to be able to obtain information on how our City can help them grow and provide them the resources in place to be successful. Also, the New York City Economic Development Corporation under my leadership will work closer to small businesses (including the self-employed) to find ways for them to take advantage of opportunities to obtain grants and other assistance to be able to grow.

Failing to count freelance workers is a monumental failure on the federal government’s part. It is important for the Bureau of Labor Statistics to revive this service because as a nation we need to have a firm understanding of how people are employed to be able to establish the best policies for our economy to grow and prosper. If we do not have reliable statistics it makes it much harder to create the proper policies. I would support a comprehensive survey of our City’s freelancers. I believe that there is untapped potential within our freelancers. A survey will help us find the policies in place to tap into that potential, which will mean more jobs and opportunities for our City’s residents.

**Thanks to Bill Thompson for answering our questions. If you need more info on how or where to vote, check out NYC.gov's voting resources. Please remember to vote on September 10! **