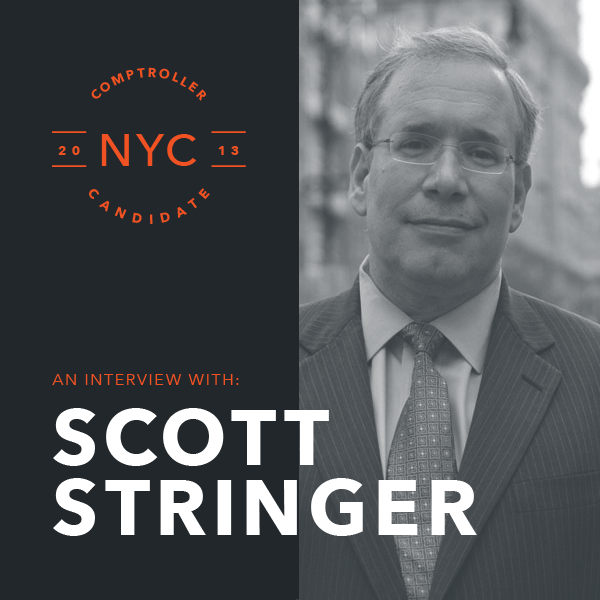 Scott Stringer is a Democratic candidate for Comptroller of New York City. To learn more about Scott Stringer, visit his website. His responses are below.

New York City is known as a hotbed of Fortune 500 companies. However, while the “FIRE” economies of finance, insurance, and real estate continue to form a major foundation of the City’s economy, freelancers have never been more important, especially as the era of the “creative class” has blossomed throughout the five boroughs.

As Comptroller, I will work to ensure that all business—whether big, small, or _individual—_are able to flourish in NYC, by cutting red tape, building the necessary infrastructure that is the backbone of regional growth, and ensuring that New York City remains a safe, affordable place for people to raise families.

Last year, I laid out a comprehensive set of recommendations for growing and reforming New York’s entrepreneurial economy —from finance, fashion and food, to marketing and media—into a pipeline to the middle class, in a pioneering report “Start-Up City: Growing New York’s Entrepreneurial Economy for All.” Those recommendations—from internet connectivity and affordable housing/office space, to transportation improvements and streamlining DOB practices, are designed to not only make it easier for startups to operate in NYC, but also to help assist freelancers in continuing to boost our economy.

In particular, I proposed NYC ShareSpace—a website serving as a bulletin board for start-ups and freelancers to join forces in the search for viable office space. This is critical, especially in an era in which finding a workspace is becoming increasingly competitive.

In addition, I have supported a bill in the New York State Legislature that would extend the Freelancers Insurance Company (FIC) through 2014. By helping to reduce the rising cost of health insurance coverage for nearly 25,000 Freelancers Union members (at premiums that average 40 percent less than plans available on the individual and group markets in New York City), FIC has been a model for the rest of the nation.

City government already provides targeted services to many industries and businesses, from the Mayor’s Office of Film, Television, and Broadcasting (MOFTB), which streamlines the process of shooting film on our streets, to the Office of Small Business Services, which provides a suite of resources to streamline the opening and expansion of companies throughout the City.

We should build on the success of these approaches by launching a special freelancers unit within SBS to address the unique needs of this burgeoning population.

In addition, we should offer workshops for freelancers to learn about opportunities to build their businesses through the City’s procurement process. The City spends over $10 billion a year on goods and services. While many contracts (such as for the 7-line extension) must be filled by larger companies, there are millions of dollars in smaller contracts that can and should be filled by local small businesses and freelancers.

Given the incredible growth in the freelance economy, it is essential for either BLS or the Census Bureau (through its annual “American Community Survey”) to provide rich data. While NYC could perform a survey on its own, the rise of the freelance economy in cities across the country means that the most efficient way to perform these surveys is via the Federal Government, which already has the apparatus set up for this type of data collection. City government could then decide to add to this national snapshot via periodic targeted surveys of freelancers in the five boroughs, in order to determine the unique needs of our local population.

Ultimately, BLS/Census Bureau should not simply rehash the same old survey. Instead, it should update the parameters of the survey to better reflect the reality of freelance work today. In particular, this means expanding the category of “contingent workers” to include other “independent” workers, include day, part-time, and temporary laborers. Moreover, as Jeff Wald of Work Market recently discussed, collecting data on freelance workers should not be viewed as an annual exercise, but instead one that parallels the monthly employment reports already published by BLS.

**Thanks to Scott Stringer for answering our questions. If you need more info on how or where to vote, check out NYC.gov's voting resources. Please remember to vote on September 10! **