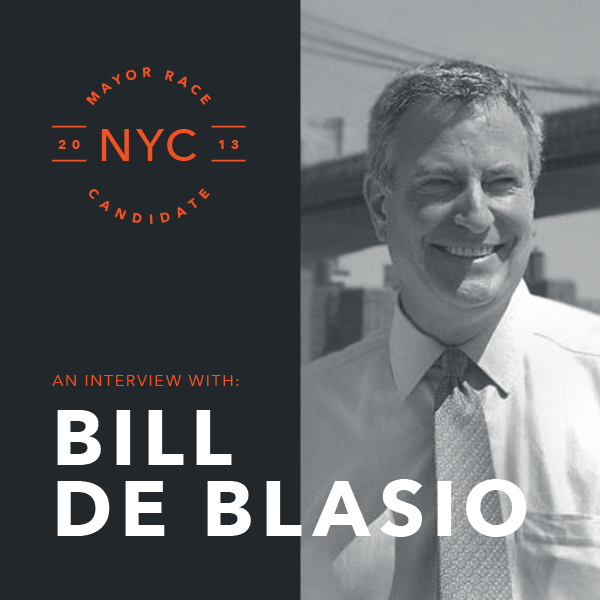 Bill de Blasio is a Democratic candidate for Mayor of New York City. To learn more about Bill de Blasio, visit his website. His responses are below.

My campaign is based in the belief that we must end the growth of income inequality and halt economic development that focuses solely on big business and developers. Any policy designed to create living-wage jobs must take into account the growing number of freelancers and their importance to the City’s economy.

I am a strong supporter of the Freelancer Payment Protect Act. We must ensure that the City’s fastest-growing workforce is afforded necessary protections from predatory clients. Independent workers deserve recourse to hold non-paying clients accountable. I have also supported the Freelancers’ efforts to increase access to affordable, quality health care, including the 2009 pilot program authorized by the State Legislature to help the Freelancers provide health insurance to independent workers.

As Mayor, I will advocate for the Freelancer Payment Protection Act. I will also work with the Freelancers Union and other organizations to determine what services are most needed, taking into account the needs of immigrant and foreign-born freelancers.

It is impossible to have the proper policies without correct data, especially on this important and growing sector of our economy.

As Mayor, I will join with the Freelancers Union and our Congressional delegation and other interested parties in fighting to ensure the federal government regularly collects data on freelancers in New York and around the country.

Anything that counts is counted. Freelancers count.

First, the City should encourage and support the creation of job exchanges and other methods that help freelancers avoid or reduce periods of unemployment. The City should also allow freelancers to qualify for job training programs, so that they can broaden their skill set and marketability. Additionally, we should explore the possibility of tax-advantaged savings accounts and specialized credit unions that provide financial support tailored to freelancers.

First, the City should support efforts by freelancers, the self-employed and small businesses owners to collaborate in growing their businesses and reducing their costs. These efforts increase these individuals’ success rate, increase the income of this major economic sector, and, thus, significantly decrease the City’s income inequality. Second, the City must review its own tax structure and

work for reform at the state and federal level so that freelancers and the self- employed no longer suffer from unfair taxes that are greater than those of workers and big businesses. Finally, ensuring freelancers’ access to affordable health insurance must also be a top priority.

**Thanks to Bill de Blasio for answering our questions. If you need more info on how or where to vote, check out NYC.gov's voting resources. Please remember to vote on September 10! **