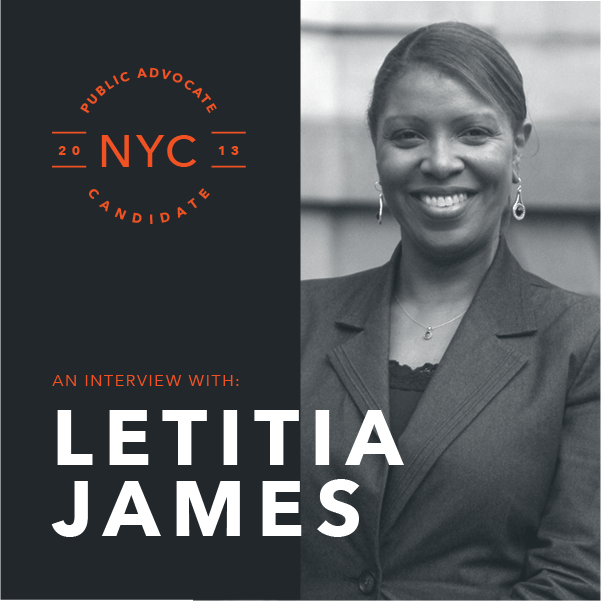 Letitia James is a Democratic candidate for Public Advocate of New York City. To learn more about Letitia James, visit her website. Her responses are below.

The recent recession highlighted the importance of freelancers – freelancers have helped to fill a void in the job market and will play a major role in our City’s recovery and future growth in our City’s economy. I worked with my colleagues in the Council to get Albany to change the S-Corp laws that hurt freelancers who were being double taxed. This was a great example of why our laws must keep up with our dynamic economy and the need to support working people.

2.** Many freelancers are self-employed and/or entrepreneurs who face a myriad of legal, regulatory and tax issues when starting and operating their business in New York City. How would you expand offerings for independent workers to start, maintain and grow their businesses? **

As much as we have paid attention to small businesses, we must do the same for freelancers across this City. This is a new economy and we must do our part to work with freelancers to ensure they are protected and are able to succeed without going through hurdles.

3.** Nearly 1 in 3 workers (or 42 million people) work freelance across the U.S., according to a 2006 GAO report. But 2006 was the last time the federal government counted this crucial part of the new workforce. Accurate, comprehensive data is crucial to crafting policies that address the needs of this sector. How important do you feel it is that the Bureau of Labor Statistics revives the survey? What are your thoughts on conducting a comprehensive survey of NYC freelancers to collect demographic data and assess the economic impact of their work?**

In order for NYC to effectively work with freelancers and create effective and fair policies, a comprehensive survey needs to be conducted. We cannot wait for the Bureau of Labor Statistics to revive their survey. I would work with my colleagues in government to secure funds so such a survey can be conducted.

4.** Unlike many other workers, freelancers have episodic income but are not eligible for unemployment benefits. What would you do to assist freelancers during periods of unemployment? What ideas do you have for assisting freelancers in saving for these times?**

Freelancers will continue to play a major roll, as it has during the recession, in our City’s economic recovery. It’s also safe to say that it will play a valuable role in the future growth of this City. We need to work with Albany to change current unemployment laws so they can be included in receiving such benefits. While freelancers don’t pay into the unemployment system as traditional employees and small business, the income freelancers make is subject to taxation; therefore they should have access to unemployment benefits. However, what those benefits will look like will be determined from the results of a comprehensive survey and discussion with the membership of Freelancers Union. We should also look into allowing freelancers to pay into a welfare fund similar to what Labor Unions have available to its membership during strikes.

5.** Freelancers are, by nature, entrepreneurs who have built their own communities to support their work and themselves. This is a model more and more New Yorkers are learning from and building more economically sustainable, cooperative, and collaborative institutions. How will you support these new institutions, including cooperatives, social purpose businesses and collaborative consumption organizations?**

We need to ensure tax laws and labor laws and other small business laws evolve and take into consideration the importance of freelancers. We need to ensure we protect freelancers and create an environment that is sustainable to them and continues to be a benefit to our City. I would work with Freelancers Union and its membership to advocate for protections that their counterparts have in the corporate and small business market.

**Thanks to Letitia James for answering our questions. If you need more info on how or where to vote, check out NYC.gov's voting resources. Please remember to vote on September 10! **