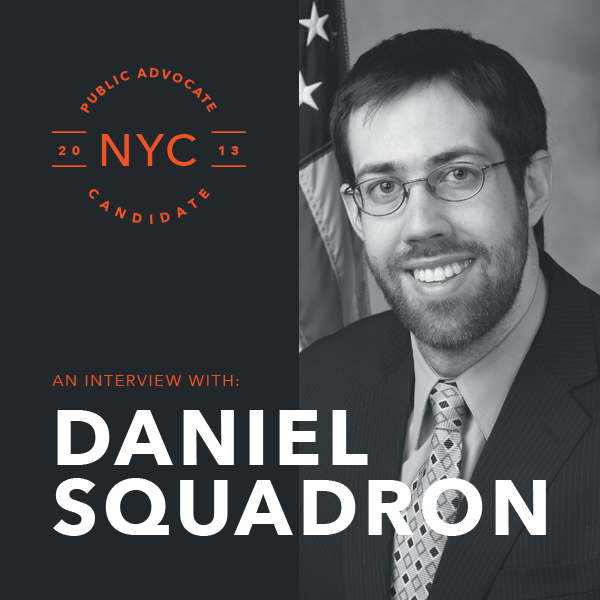 Daniel Squadron is a Democratic candidate for Public Advocate of New York City. To learn more about Daniel Squadron, visit his website. His responses are below.

First elected to the State Senate in 2008, I unseated a 30-year incumbent and have a proven track record of delivering results -- fighting corruption in Albany, writing landmark new gun laws, and advocating for affordable housing, parks, and public transportation.

I know freelancers are a key part of the city’s economy, energy and creative spirit. I introduced the Freelancer Payment Protection Act to make sure all workers can collect the money they’ve rightfully earned. As Public Advocate, I will deliver results for all New Yorkers – including freelancers – that make our city more livable, affordable, and efficient.

Freelancers are an integral and growing part of New York’s economy. They bring a special creativity and entrepreneurial spirit to the workforce and are a key part of the creative energy that makes New York City great.

Of course, freelancers are also too often seen by employers as a way to undermine wages, benefits and job protections. That’s why I was the original sponsor of The Freelancer Payment Protection Act (in its current version, with a Republican lead sponsor, S4129).

In addition, when the Metropolitan Commuter Transportation and Mobility Tax was modified, I identified a “freelancers penalty” that affected freelancers earning as little as $50,000 per year. I worked in a bipartisan way to push to raise the threshold to reduce that “freelancers penalty.”

2.** Many freelancers are self-employed and/or entrepreneurs who face a myriad of legal, regulatory and tax issues when starting and operating their business in New York City. How would you expand offerings for independent workers to start, maintain and grow their businesses? **

The challenges that independent workers face are the result of an administrative system that is huge, and supported by powerful interests, but not sufficiently accountable to the individuals whose lives are profoundly influenced by it.

In addition to the legislation mentioned above I have also worked to make my district and the city more supportive of the lives of freelancers and the types of industries that often employ them.

I have fought to grow New York's burgeoning tech sector, including by successfully advocating for a new NYU tech campus in Downtown Brooklyn and a new bus route to serve the developing "Tech Triangle" in DUMBO and the Brooklyn Navy Yard. I have also encouraged not-for-profit organizations in my district to start incubators that would provide space and support for independent contractors to work and access facilities.

In addition, I pioneered the MTA’s full-line reviews, and called for them to be applied to the F, L and G lines, leading to improved service, on-time performance and stations. The changes in MTA use that led to the need for full-line reviews – and the results the reviews achieved – were significantly driven by freelancers who live in expanding neighborhoods along these lines.

3.** Nearly 1 in 3 workers (or 42 million people) work freelance across the U.S., according to a 2006 GAO report. But 2006 was the last time the federal government counted this crucial part of the new workforce. Accurate, comprehensive data is crucial to crafting policies that address the needs of this sector. How important do you feel it is that the Bureau of Labor Statistics revives the survey? What are your thoughts on conducting a comprehensive survey of NYC freelancers to collect demographic data and assess the economic impact of their work?**

It is important that the Bureau of Labor Statistics revives this survey. Partnering with the Freelancers Union to develop and enact a survey in NYC would potentially be a role for the Public Advocate – a role that is unlikely to be taken on by City Hall.

4.** Unlike many other workers, freelancers have episodic income but are not eligible for unemployment benefits. What would you do to assist freelancers during periods of unemployment? What ideas do you have for assisting freelancers in saving for these times?**

I would use the role of the Public Advocate to ensure that independent contractors have greater access to the information and benefits available to them – from small business loans to food stamps. And I would push the bureaucracy to make it easier to understand, access and receive high-quality service from city agencies.

(The bills I have carried are part of this solution as well.)

5.** Freelancers are, by nature, entrepreneurs who have built their own communities to support their work and themselves. This is a model more and more New Yorkers are learning from and building more economically sustainable, cooperative, and collaborative institutions. How will you support these new institutions, including cooperatives, social purpose businesses and collaborative consumption organizations?**

I sponsored and passed legislation creating benefit corporations in New York, allowing businesses large and small to pursue the public interest, rather than simply maximizing shareholder value, while also operating as for-profits.

I also am a strong supporter of the Freelancers Union’s model of healthcare delivery, which reflects many of the values above.

Those are only two of many pieces that can build more economically sustainable, cooperative and collaborative institutions. I am eager to partner to support, build, expand and find more, and believe the Public Advocate’s office must be a central part of that project.

The bureaucracy run by City Hall does not always reflect this, but New York City’s greatest asset is its ability to integrate individuals and ideas, and provide a platform that allows them to thrive as they wouldn’t anywhere else.

**Thanks to Daniel Squadron for answering our questions. If you need more info on how or where to vote, check out NYC.gov's voting resources. Please remember to vote on September 10! **