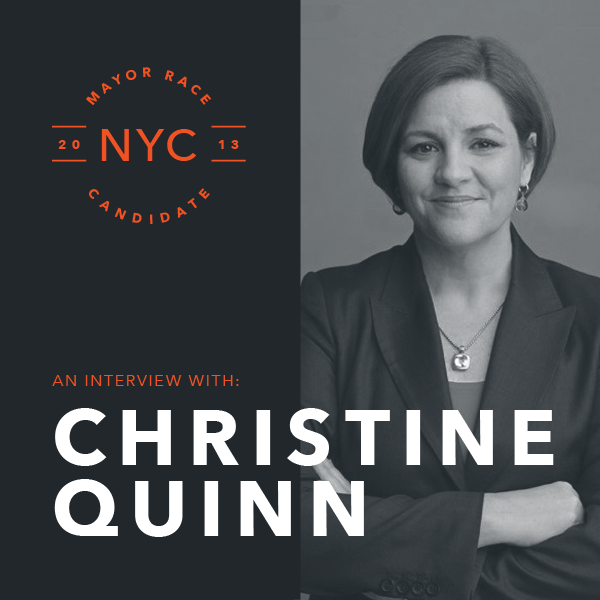 Christine Quinn is a Democratic candidate for Mayor of New York City. To learn more about Christine Quinn, visit her website. Her responses are below.

I have great respect for freelancers as drivers of the economy and as important symbols of our changing workforce. I am proud to have represented the interests of the self­employed throughout my tenure as Speaker of the City Council. The freelancers’ medical clinic I supported in 2012, which I will discuss in more detail in answers below, can serve as a model for health care in the city under my administration. I will also continue to support the Regulatory Review Panel, a board I created to help small businesses avoid fines and communicate with regulators. This record of achievement for New York’s freelancers makes me the strongest candidate to represent them as mayor.

As you mentioned in your letter, the workforce is shifting in this country. I believe it is important for the people who work in freelance positions to be afforded the same respect and protection as those in more “traditional” jobs, and as mayor I will continue to support freelancers. As stated above, I believe freelancers bring just as much to the economy as any other worker, and should be respected as such.

In 2012, as Speaker of the City Council, I pledged $100,000 for the freelancers’ medical clinic in Brooklyn. I believe it is critically important for freelancers to have access to quality medical care and be able to see a doctor just as readily as those with traditional medical benefits. This clinic will provide low­cost medical care to freelancers and it is my hope that these clinics appear in all five boroughs. This kind of creative health care model has the power to connect more New Yorkers to primary care, take some of the burden off of struggling hospitals, and strengthen our non­profit healthcare system.

2. Many freelancers are self­-employed and/or entrepreneurs who face a myriad of legal, regulatory and tax issues when starting and operating their business in New York City. How would you expand offerings for independent workers to start, maintain and grow their businesses?

I am sympathetic to the many bureaucratic barriers facing small businesses in the city. I have addressed this issue as Speaker and will continue to do so as mayor.

As mayor I will continue to work to make it easier for businesses to open and operate by implementing NYC Business Link, which will cut red tape by enabling a small business owner to call 311 and be directed to a single point of contact with the City, providing licenses, permits and inspections in one stop. I look forward to working with the Freelancers’ Union to discover more ways I can help.

3. Nearly 1 in 3 workers (or 42 million people) work freelance across the U.S., according to a 2006 GAO report. But 2006 was the last time the federal government counted this crucial part of the new workforce. Accurate, comprehensive data is crucial to crafting policies that address the needs of this sector. How important do you feel it is that the Bureau of Labor Statistics revives the survey? What are your thoughts on conducting a comprehensive survey of NYC freelancers to collect demographic data and assess the economic impact of their work?

I think it is important to collect data on this critical part of our economy and I support the collection of more data. I was interested to read the 2009 Freelancers Union survey and feel we can only benefit from a clearer picture of this sector. The results of that survey told us that most freelancers work in New York, and these are the ones I am most concerned about. I support additional efforts to get information on this dynamic population.

As mayor I’ll look to explore savings and personal finance programming through the city’s Office of Financial Empowerment however the best solution is to ensure every New Yorker keeps their job or finds a new one quickly. My workforce development plan includes retraining and education to ensure that workers can quickly make transitions. Additionally, I will make sure that we include support for freelancers within our current Workforce1 centers to ensure that every type of worker in the city gets the support they need.

As above, I have been instrumental in securing funding for the Freelancers’ health clinic and am an active proponent of making it easier for those who go into business for themselves. I look forward to working with the Freelancers’ Union and other groups and stakeholders to find new ways to make our economy more inclusive and able to sustain those with the spirit and courage to go into business for themselves.

**Thanks to Christine Quinn for answering our questions. If you need more info on how or where to vote, check out NYC.gov's voting resources. Please remember to vote on September 10! **