The power of millions of people saying, "Hey, let me try this out." 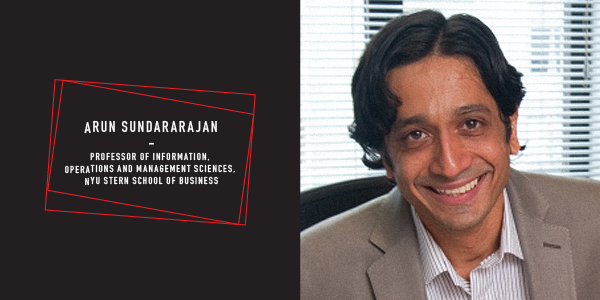 Friends and colleagues are always sending me articles about the New Economy, and lately I’ve been struck by how the sharing-economy movement can only be described in two ways:

Either it’s a great innovation that’s transforming or society in wonderful ways we’re just beginning to understand…Or, it’s an alarming trend that will stifle economic growth and lead to the destruction of the American Dream.

Really, just one or the other? The issues are so complex, there has to be a more nuanced discussion going on somewhere.

I figured it was time to speak with an authority on the subject.

Arun Sundararajan is a professor at NYU’s Stern School of Business who studies digital economics. He’s obsessed with how technology transforms business and society. I had read some of his pieces, and I wanted to learn more. So, I called him up.

Sara Horowitz: I’d love to hear a little bit about how you would describe the sharing economy, and how you see your role in all of this?

Arun Sundararajan: The role that I traditionally play is as someone who thinks about, does research on and writes about how digital technology is changing things. Over the last two years, we’ve seen a transformation in consumption that is now being called the sharing economy. To me, it’s just another example of digital technology transforming something substantial in our society. It's creating a whole new army of suppliers who can become Airbnb hosts and Lyft drivers

Sara: So what is it that digital systems are really changing?

Arun: When I was a graduate student, companies were discovering the Ethernet and networked computing. Companies used these powerful new digital technologies to radically change the way they organized work. The '90s were characterized by "reengineering work".

Fast forward a couple of decades, and now we’ve got consumers with powerful, networked, mobile computing technology in their palms. Everything is being driven by consumer needs now. Microsoft, Facebook and Samung are not looking primarily at what a company needs--they're looking at what the consumer needs. Mobile phone companies are developing technologies for consumers first, then adapting them for businesses. This is a massive, historic transition. So the time is now ripe for us consumers to "reengineer" the way we consume.

Sara: So then, what is that power that consumers have? Is it just to consume more efficiently?

Arun: It’s broader than that. It expands choice.

Let’s take a family of five. Their vacation options used to be constrained by the fact that they would have to get two to three hotel rooms, or try to find a vacation rental. Now with Airbnb, there’s suddenly a wide array of accommodation alternatives. This makes travel and tourism more widespread.

In cities where you have numerous ridesharing options, people can organize their days more efficiently with the knowledge that with the click of a button, they can get a taxi. So I don’t actually think that people are doing this just to save money. They're also growing their opeions and possibly changing how they live.

Sara: So it seems that if we think about the sharing economy, like Airbnb, the transaction is individual-to-individual, but on a platform, it’s the summation of individuals acting and sharing together.

Arun: Yes. Companies like Hertz on Demand and Zipcar are thought of as being part of the sharing economy, and they sort of are, but really they’re the transition business models. Like Rent the Runway and Girl Meets Dress, these are corporations renting things to consumers more efficiently. The really exciting part is the peer-to-peer part, because it's creating a whole new army of suppliers who can now become Airbnb hosts, Lyft drivers, RelayRide fleet runners.

**What’s really powering the sharing economy is trust.Sara: It lets individuals be more entrepreneurial and enter the market much more easily. They don’t have to have the capital to start a hotel, they just have to have a room. **

But one of the things I wonder about is, why don’t communities get together to create platforms so that they're encouraging a more local economy of sharing?

Sara: I wonder if this distinction between virtual and local is going to become a stupid distinction. The technology just enables us to find one another better. Whether it’s face to face or virtual, does that even make a difference?

Sara: What do you mean?

Arun: Aside from the technology, what’s really powering the sharing economy is marketplace-enforced trust--the fact that we are able to rely on the people who are lending us their stuff, or who are renting us their apartments, and vice-versa. These are called reputation systems.

That trust gets strengthened even further when you go beyond the data trails of activity on Airbnb or Lyft and start to nurture the real world interactions between these people.

You're not only fostering a greater sense of community, but you're also strengthening the foundations of the commercial activity--because if this is a community where people can vouch for each other, more people will be willing to participate.

**It's not purely digital. There's a physical aspect, where you're entering someone else's space.Sara: In some ways, that’s the basis of the whole PEERS network [a new advocacy organization for the sharing economy], to mobilize people to see that they’re part of something larger, to help influence the electoral, legal, regulatory frameworks. I could see how a visionary community leader might want organize a group of people to participate in these things, you know? **

Arun: I think you're right. What will also be interesting is that over the next few years we’re going to see a shared culture emerge.

Here’s what I mean: As more people start to participate in the sharing economy, it will start to change the meaning of everyday things. If you start to rent your apartment out on Aibnb, the meaning of that space changes for you. It’s no longer just simply your personal space; it’s also generating revenue for you, so the way you treat the space changes. But it only changes for that fraction of people who are participating in the sharing economy.

By pulling together the people for whom the meaning of these familiar things is changing, PEERS can be really powerful.

Sara: That’s so interesting. It makes me think of all those cities where people have two-family houses, and I wonder how many of them will start looking at their homes differently, and how soon it will happen.

Arun: Yeah, I also wonder. And I’m guessing that a number of them will be part of your organization, or will soon be, because there’s a new class of freelancers who are making a living by offering a portfolio of sharing economy services.

Sara: It also seems like our expectations of things are changing. We’ve all been taught to figure out what your mortgage payment will be when you go to buy a home. It will be interesting to see when people start factoring in how many days or nights they’ll be renting out their place, or their car or whatever, into that decision. It seems a little too early right now, but that’s not inconceivable.

Arun: I’m really glad you brought that up because to a lot of people, the idea that we’re using our assets more efficiently means people will buy less stuff, and that will mean fewer things need to be produced, and that’s not good for the economy. My belief is that it’s exactly the opposite: when a technological change comes along that makes “production” more efficient, it eventually grows the economy because it creates new opportunities.

The mortgage example is exactly that. It’s more likely that I’ll be able to afford a larger space if I can explicitly factor in the revenue stream that I’ll get from renting it out during the ten days that I’m traveling. And that is expansive for the economy, not recessionary, because I’m probably going to get more space. People are going to use that space when I’m not there, and that generates commercial activity as well.

Sara: I think the big political issue here is, what’s going to happen with the macro trends of income inequality? If this is used to just enable the skewed income inequality to only get worse, that’s not terribly exciting. But if there are ways to imagine how more people could do this, and it could just become a part of how they put together a whole life, that’s where it gets to be much more interesting.

Arun: I think there’s a very good chance that if sharing economy activity becomes sufficiently widespread, it could very well reduce income inequality. It takes flows of commerce that used to be between individuals and companies and shifts them to being between individuals and other individuals. If you think about a thousand dollars flowing from you to Hertz, then that thousand dollars now flows to RelayRides or GetAround or some combination of them and Lyft and Sidecar. I think that this will have an equalizing effect on the income distribution.

The sharing economy has made it where an individual suddenly has this portfolio of things that you can feasibly and cheaply start to offer the world. The creative potential here is limitless, because it's simply millions of people saying, “Hey, let me try this out.”