This is what happens when you talk to strangers 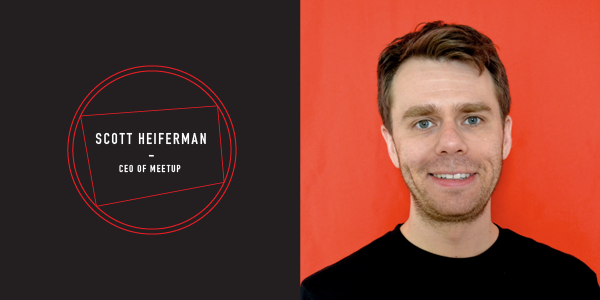 I spend a lot of time thinking about what brings people together, and how to enable that on a bigger scale. After all, we’re trying to bring freelancers together across the country.

When I need to bounce ideas off someone, I talk to one of my favorite people in the internet world, Scott Heiferman, CEO and co-founder of Meetup. He’s got this pretty much figured out by now.

He’s a serial entrepreneur who has spent the past 12 years building this great engine that’s enabled 15 million people to join together in affinity groups, activity groups and mini-communities.

Whenever we have a discussion, we explore new ground. Thought I’d bring you along with me on this one.

Sara Horowitz: You were one of the first companies to really think about how to do things that are socially good, and since then, it has become a big part of the for-profit sector.

You know, the reality is, the social sector isn’t doing the things that need to get done, and the for-profit sector is. So when I see nonprofit folks being uncomfortable with this idea, it just seems quaint and outdated. I'd love to hear your thoughts.

It all starts from this simple power to connect.Scott Heiferman: I used to be kind of obsessed with that question, and I’ve just woken up to the idea that doing social good is a fancy way of saying “doing something that’s needed.” People need a good grocery store, a good restaurant, a good dry cleaner…they need lots of things, and to say that some companies are almost philanthropic in nature doesn’t feel right.

There's a lot to do to make the world work OK. Some businesses do things that people don't really need, like some of the financial and ad industries. At Meetup, we do something that is needed, but so did my Dad, who ran a paint store. I try to stay away from being high and mighty about this stuff.

Sara Horowitz: I think this discussion zeroes in on two areas: ownership, (as in, where do the returns go), and income inequality. They’re related. My thinking isn’t crystal clear here, but these for-profit vehicles seem to be so much more responsive to the market, and they’re thinking about creative ways to have ownership go back to the people doing the work.

Scott: There probably is a relationship between companies doing things that are needed vs. not needed and companies interested in improving wealth disparity. But those are two different things. I mean, you can be Halliburton or a cigarette maker and really focus on having a low ratio between CEO pay and that of the lowest-paid employee—that’s where it gets tricky.

I think we’re going in the wrong direction when it comes to ownership and income disparity, but I don’t see a lot of people talking about it. I hope I'm wrong about that. Is there something happening?"

Sara: Here's what I think is happening: The social sector has not caught up to where the market is, so the normal discourse that would be happening, isn't. But I keep coming back to companies like Meetup and others in the sharing economy.

Scott: Exactly. I’m excited because there seems to be a real interest among people in the tech/entrepreneurial/internet world around platforms and networks that empower people to make a living. In the early days of eBay, [founder] Pierre Omidyar would talk about the “global economic democracy.”

The internet startup world lost that idea for a while, but now we’re getting back to it, whether it’s Airbnb hosts, Uber drivers or Etsy sellers.

Actually, there’s some really big stuff that we’re rolling out this year to make it easier for Meetup organizers to aggregate money within their communities and make them stronger. And lots of people are making money as Meetup organizers—they're community entrepreneurs, and that can be a great thing.

In the right context, you can talk to strangers.Sara: There’s something about the fact that people can enter the market much more easily than they ever could using these platforms, and that gives them the ability to earn more money and perhaps see new possibilities.

Scott: I know that people like me and other internet utopians tend to stupidly oversimplify the world and see the internet as a panacea, but I think what it represents is a kind of decentralization and a push to enable a middle class. It's micro-entrepreneurship, and it's really happening. It's a significant trend for the long haul.

Sara: I just hope people will see the next vista, which would be how to aggregate their businesses and grow. And then others could see that and start thinking, ‘Why don’t we get together and form a cooperative, or a mutual aid network?’

Scott: The common thread here is connection. That’s something that we live and breathe every day at Meetup: people have more power than ever to organize whatever kinds of communities they want. They may not even think of it as collective purpose or collective action, because they come at for individual reasons. Like the moms who form the mom’s Meetup and create a babysitting collective, then they go and get their town to improve the playground. It all starts from this simple power to connect.

Sara: But how do we bring this back to helping people make a decent living?

Scott: A lot of people might think that the things that you and I talk about are somehow anti-capitalist, but in fact it’s the most pure and simple form of capitalism. It’s a non-crony capitalism, a non-corrupt capitalism. It’s simply enabling people to do their thing, so there’s a middle class of companies.

We’ve only just begun to see what it means to enable people to make a living without having to plug into the screwed up parts of the giant-sized corporate world.

Sara: You've been a consistent leader on this. You didn’t say, ‘We’re going to figure out how to take Meetup to these enormous financial heights.’ Instead, you decided to focus programmatically on building something that would be useful and helpful, and you seem happy with that. I wonder, did you have hard discussions with your investors about this?

Scott: I think you're giving me too much credit. I’m proud that 15 million people are part of Meetup, but I’m much rather it be 115 million. We’re going to get there, and we’re going to get to a billion, but it’s going to take a few decades. We’re out to maximize our impact and make our dent in the universe, but we never said we want to just squeak by.

We’ve been up front all along that this is a mission-first company, and we believe that you can do well and do good at the same time. It’s all about the unleashing of love. And potential.Could we milk it for more and slap more ads on it and bastardize the thing to make short term cash? Yeah, but I don’t think that’s good for the value of the company over the long haul.

**Sara: So, what do you feel most proud of in what you've done with Meetup? **

Scott: That's really simple: it's the friendships that have been made, the communities that have formed, the babies that are born, the careers that are advanced, the fitness that’s achieved, the languages that are learned and all the projects that have come out of the magic that happens when people meet up...Sorry to sound like a commercial.

Sara: That’s sounding a little zen. Are you saying that it’s all about the love?

Scott: No, no—it’s all about the unleashing of...Ok, yes, it’s all about the unleashing of love. And potential. We’re proud of opening peoples’ eyes a little bit to the fact that the world isn’t so ugly. You can get lost in this vicious cycle of interacting with people less, trusting people less. There’s a lot of cynicism and thinking that the only reason you’d ever talk to someone you don’t know is either because you want to sell them something or because you want to hook up with them.

Instead, there’s actually this concept that we’re stuck together as a city, as a people, as a community, as a neighborhood, and it’s like, ‘Ok, so what good can we make of this?”

With the right context, you can talk to strangers. And communities can emerge. We see it happen with Meetups every day.