Finding Balance in the New Economy 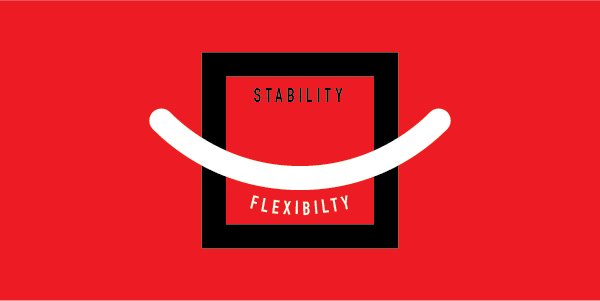 We hear it over and over again: Companies need to be nimble in order to compete in the global economy. For too many companies, that has meant shedding benefits programs, cutting full-time staff and outsourcing whatever they can.

The thing is, companies in the New Economy are looking for the same things they were looking for in the Old Economy: flexibility and stability.

And guess what? Workers are looking for flexibily and stability, too.

Workers are gaining more flexibility, but stability has gone out the window.

One of the ways we achieved flexibility and stability in the Old Economy was through the 40-hour workweek and the advent of unemployment insurance.

We tend to think of both those programs simply as worker protections, but they were just as positive for employers. A set, eight-hour day meant factories could start operating three shifts (morning, afternoon and swing-shift). That was way more productive and efficient than the free-for-all, 12- to 16-hour workday that was common practice at the time.

Unemployment insurance allowed companies move large numbers of workers on or off the payroll as needed, without leaving them destitute. It also helped companies retain furloughed employees—if they were getting paid for their time off, they were less likely to take another job somewhere else.

The system wasn’t perfect, but it did succeed in providing a measure of flexibility and stability for both workers and employers at most levels of the pay scale.

As we head into the New Economy, we need to figure out how to recalibrate that balance. As any freelancer will tell you, we’re at a serious imbalance. Worker protections are disappearing (at the low and high ends of the pay scale, by the way) and very little is emerging to take their place.

People are entering the freelance workforce in droves, some by choice and some by circumstance, and while they’re gaining more flexibility, stability has gone out the window.

I had a really interesting conversation about this the other day when I was invited onto the Diane Rehm Show, on NPR, to discuss the freelance workforce with Fabio Rosati, CEO of Elance, and Ross Eisenbrey of the Economic Policy Institute. We need to reclaim that stability, and we can't do it alone.

Some of the positive things to come out of this transition are that we’re seeing people re-imagine their work-life balance. Suddenly they’re able to make time for family, hobbies and other life-things that give them fulfillment. We like to call it meaningful independence.

They’re also reassessing their lifestyle and consumption habits. They’re sharing rather than owning, focusing on where their food comes from, building communities, and trying to have a positive impact on their natural environment.

What needs to come next is reclaiming that stability, and that’s something we can’t do alone. It’s a movement, and independent workers are leading the way. Let’s see what we can build.