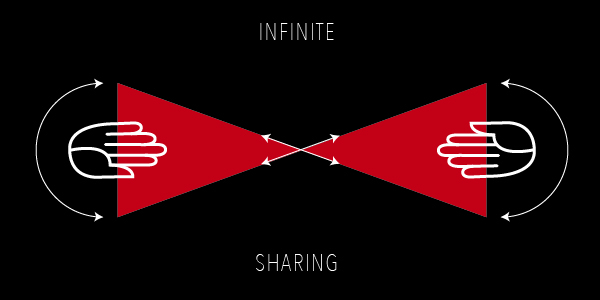 I've been hearing a lot of talk from freelancers the past few months about the "sharing economy" (some call it the "peer economy"). I’m among the first to say that I like the companies that have come up so far.

Airbnb? Huge fan. Kickstarter? Power to ‘em. Gumroad? Tons of our members use it. Zipcar? Loved the concept, although I don’t love how they were bought by Avis.

We need to build a strong social sector based on models like cooperatives, where members have ownership and profits are shared. These companies built a brilliant infrastructure to allow large-scale networking and collaboration and are asking essential questions of our society.

But there’s a limit to how much actual sharing is going on here.

Most of the pioneers of the peer economy are backed by venture capital firms who’ve spent millions building these platforms, and they expect to earn millions in return. And that’s fine, but let’s be clear that most of the fruits of those rewards are being shared among a small group of investors and company owners.

The members of these peer communities—the people whose thousands of individual transactions make the networks successful in the first place—aren't really sharing in the wealth they’re generating. To wit: Zipcar was acquired in January for $500 million, but its members, who made that valuation possible, didn’t get a share of that.

We also need to build a strong social sector based on models like cooperatives, where members have ownership and profits are shared.

We can use the infrastructure created by the peer economy to create social-purpose institutions, nonprofits, community-development organizations, a new labor movement and other collaborative networks.

The thing about an ecosystem is that all of its elements are interdependent, nourishing each other. In this new economic ecosystem, we’re already seeing social sector enterprises coming up, learning from the successes of their for-profit peers.

There’s a non-profit side of the peer economy, like community network Shareable and lending/bartering sites like Freecycle and others.

Sustainable for-profit businesses play another role. They can range from community-classifieds Craigslist (a pioneer in its own right), to local co-working spaces to social-purpose companies like Freelancers Insurance Company.

Corporate certification programs are also helping to build this new economic ecosystem, like Fair Trade, LEED (Leadership in Energy and Environmental Design) and Certified B Corps, which have agreed to certain environmentally- and socially-conscious business practices.

Then there’s my personal favorite, the cooperative movement. From the National Cooperative Business Association, to insurance coops like Nationwide, to agricultural cooperatives like Cabot Creamery, Sunkist, and Land O’ Lakes, these guys will have a crucial role in the new economy.

In the new economy, all of these sectors are connected—in other words, we’re all swimming together, and I think we’re looking for similar things. There’s a lot more sharing ahead.

What's the sharing economy like in your community? Please let me know in the comments or on Twitter at @Sara_Horowitz.