A Freelancer by Any Other Name 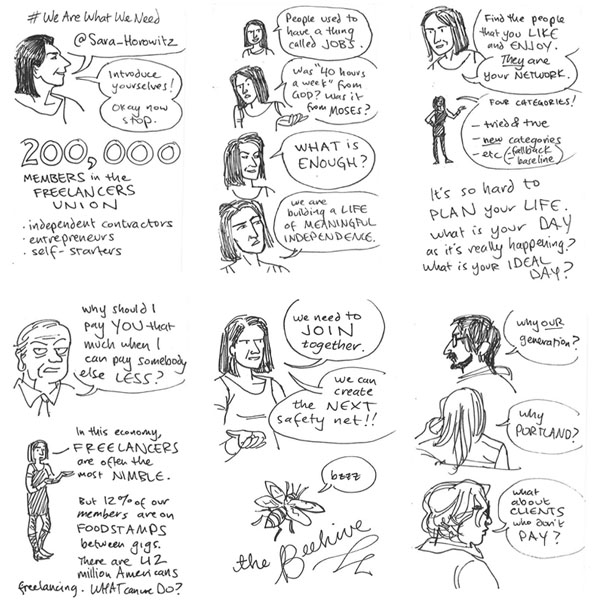 Freelancers choose all kinds of different names, but they all share the same meaning: a sense of independence and the freedom (or responsibility) to make your own choices.

There really is this thing called a freelancer identity, and I saw it last week in full force when I met with groups of freelancers on the West Coast.

I went to Portland and Los Angeles for a couple of book events, and to take the pulse of the freelancer communities there. We set up group discussions at two coworking spaces, NedSpace in Portland, and at NextSpace in LA.

The conversations we had in both places made me want to take these events to cities all over the US. More than 100 freelancers showed up, and I was blown away by how eager everyone was to share their experience and help each other.

A makeup artist who had just moved to LA talked about how daunting it was to try and break in to the industry. How do you land that first gig? A dozen people piped up offering advice and leads, and not just other makeup artists.

Everyone we met was excited about their work/life situation, proud to be freelancers, and eager to share. What came through was that whether you’re an actuary or an architect, if you’re a freelancer, you’ve had common experiences and face common issues.

And don’t think this is just a Gen-X or Gen-Y phenomenon. The groups ranged in age from 20-something web designers to 60-something book keepers.

People at both events talked about networking—not the shoving-your-card-in-someone’s-face kind of networking, but as in, building a life filled with people you care about. You help each other because you have a genuine connection, not because you’re trying to gather as many names as possible for your contact list.

Other people were interested in launching incubators or finding affordable business services.

Dylan Meconis, a freelance comic book creator in Portland, was so engaged by the group discussion that she drew a cartoon of it in real-time.

What kept coming up was this collective wish to figure out a model for organizing freelancers, so independent workers could come together for mutual goals.

Here’s what I mean: Diana, a freelancer from the Bay Area, talked about how childcare kept coming up among the freelancers at her coworking space, Next Space in San Francisco. So, she created a childcare program within the building (called NextKids), and now members have a place to drop their kids off a few days a week.

By collaborating with an existing institution—her coworking space—Diana was able to set up a new enterprise that responded to members’ needs.

As we move forward in building the new economy, we all need to be thinking that way—freelancers, contractors, consultants, free rangers, the self-employed…all of us.