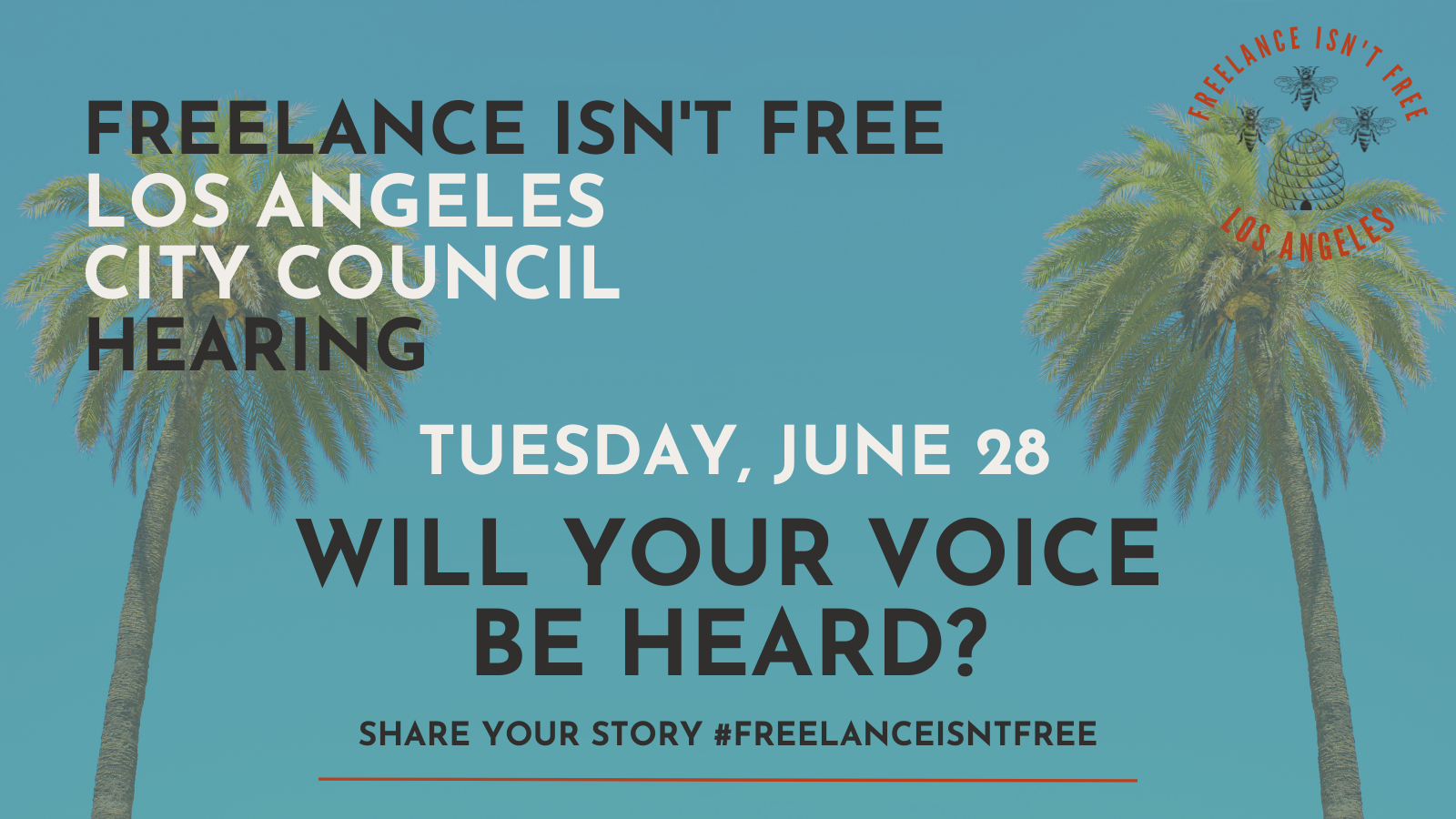 Add your voice in support of Los Angeles instituting Freelance Isn’t Free and share your grievances with client non-payment ahead of the City Council Committee hearing on June 28th at. 3:30 pm PT.

​​Since 1995, the Freelancers Union mission has been to build something better together. We endeavor to produce and execute solutions for our members’ number one problem – and right now that’s non-payment, with 74% of freelancers reporting having issues with getting paid late or not paid at all.

Freelancers Union led a victorious campaign to enact first-of-its-kind Freelance Isn't Free legislation in New York City giving freelancers unprecedented protections from nonpayment, and we were able to bring it statewide just this June. Our fight won’t stop with NY and we are working tirelessly to bring it to other cities and states, starting with Los Angeles.

Los Angeles is known for its iconic entertainment, arts and cultural economy. But what is less known is the role freelance professionals play in bolstering these sectors and driving growth. In fact, Los Angeles is home to the second largest population of freelancers in the United States, bringing in $20 billion dollars of revenue per year.

Yet, for too long, this group of workers has been devoid of adequate protections. It often takes weeks to months to get an invoice paid – if a payment even comes at all –  and freelancers have virtually no recourse when they get stiffed. In a city founded on creative workers, this should not be the case.

That is why we've worked with L.A. City Councilmember Bob Blumenfield to author and introduce legislation to create a city-wide Freelance Isn't Free Act. Next Tuesday, June 28th at 3:30pm PT, the L.A. City Council Committee will be holding a hearing on the bill via Zoom.

The most important tool we have is our voices. Councilmembers need to hear from freelancers who have suffered because of nonpayment to understand the scope of the issue. It’s time to speak up! Find your City Councilmember here and click here for a sample script (for both writing and by phone) to tell your councilmember.

If you are interested in working with us directly to make this law a reality, either by providing a testimonial or helping to organize your freelance peers, please reach out directly to advocacy@freelancersunion.org.

Freelance Isn’t Free Law establishes and enhances protections for freelance workers, specifically the right to a written contract, timely and full payment, and protection from retaliation. The law establishes penalties for violations of these rights, including statutory damages, double damages, injunctive relief, and attorneys’ fees and costs.