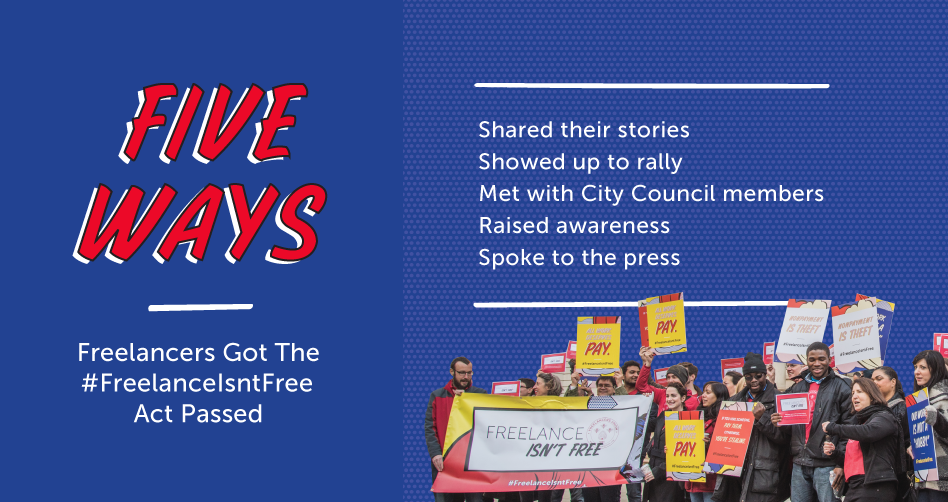 For most of us, a new law is just something that appears one day – in the news, on a neighborhood notification board, or on your desk as just another form to sign to say you've read, acknowledge and understand whatever legislation the higher powers have handed down.

Sometimes we get to vote on new laws or vote for people who will vote for new laws, but more often than not, few of us interact with the making of new legislation on a day to day basis.

This is a shame because we have the privilege of living within a society that not only allows private citizens a voice in public discourse, but encourages it – and it's easier to get involved than you might think.

On the road to getting the Freelance Isn't Free Act passed, members from all walks of life in New York City joined the cause. As we look forward to helping this legislation travel to other cities across the nation, keep in mind these 5 easy ways you can get involved in your local movement to end client late and nonpayment:

1. They shared their stories

We began collecting member stories early in the campaign. Initially, we feared it might be difficult to encourage people to come forward – reputation is everything in freelancing, after all, and the fear of being perceived as difficult is enough to silence any independent worker trying to make it in their industry.

That's why we have to hand it to those very first members who shared their stories – they recognized that the culture of silence around nonpayment was part of the problem, and had the courage to come out and talk about the issue.

Shortly after those stories came out, our inboxes were flooded with freelancers who had their own stories to tell.

The first step towards making change is acknowledging the problem.

You know the saying that showing up is half the battle? Well, it's really more like 90% of the battle – especially when it comes to politics. Over the course of the campaign, we held a number of events – the Town Hall at Brooklyn Borough Hall, a Day of Action, a panel at Civic Hall, a rally on the Steps of City Hall, and a legislative hearing.

Hundreds of freelancers across the city took time out of their days to just be there and show New York City policy makers that the freelance workforce is an active community – not just one that waits for change to happen.

3. They met with City Council Members

As freelancers, we're no strangers to the power of networking and the same rules apply to getting laws passed that support the new workforce. City Council members aren't just names on signs – they're living, breathing people who have, like many of us, a lot of different things going on in their lives. The best way to get your cause on the table is to go shake some hands with your local policy makers.

Over the year, a number of volunteers joined us for meetings in New York City's 51 City Council districts. These members were integral to getting all of the City Council members on board to pass the Freelance Isn't Free Act unanimously.

Not everyone can donate a ton of time – it's just a fact of life. Luckily, in this day and age, there are a few short cuts to getting your voice heard. Social media is a powerful platform and though a Facebook post or tweet might seem like "slacktivism" – the truth is, spreading a little awareness can go a long way.

Not only does sharing causes important to you on your social media channels help to educate and inform your social networks, but policy makers do pay attention to the volume of conversation happening online.

We live in the information age and, if used well, the internet can be a powerful tool for making change happen. The Freelance Isn't Free petition now has almost 10,000 signatures – but why shouldn't it have 55 million, one for every freelancer in the United States?

5. They spoke to the press

Speaking to the press deserves its own special spot because it's not an easy thing to do. It takes poise, courage, and a certain amount of strategic thinking. If this election cycle has taught us anything, it's that the power of the press has not diminished.

Getting in front of a camera and sharing your story is the fastest way to reach a lot of people with the added heft of legitimacy that a press outlet brings to the table.

Luckily, reporters love a story and the freelance workforce has a lot of them – so it's not too difficult to get a news outlet interested. Have you ever considered sharing your nonpayment issue with a local newspaper? It could be just the spotlight your community needs to get motivated to pass the Freelance Isn't Free Act in your city.

A big thank you to all the freelancers in New York City who made this happen - and stay tuned for more resources to help freelancers everywhere get the payment protections we need.