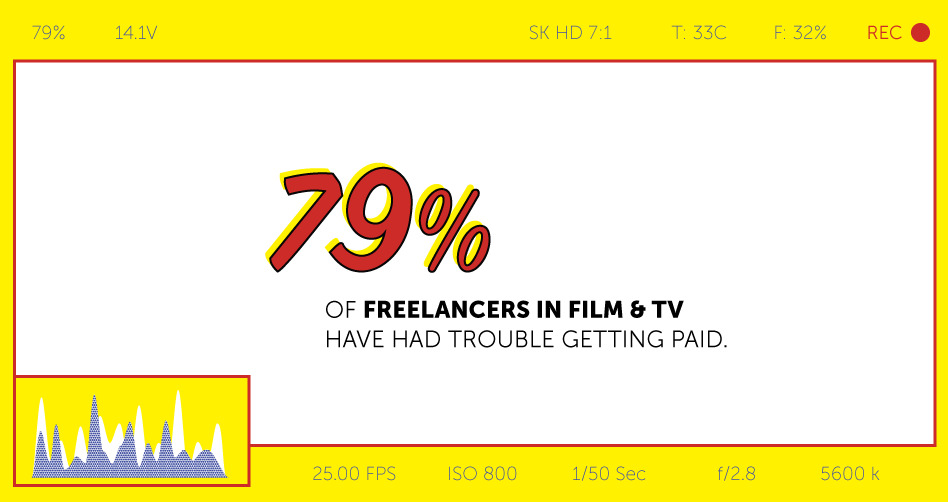 Imagine you’re a director. That’s right – you’re surrounded by beautiful actors, talented filmmakers, and an entire crew ready to work for you. Sounds like a pretty sweet gig, right?

But it’s not all glitz and glamour; the film and television industry has a dark side. 79% of freelancers in the industry have experienced nonpayment at one point in their career.

Ready to put nonpayment to an end? Join the #FreelanceIsntFree Campaign

And we’re not talking about indie productions (though it can happen there, too), we’re talking big companies with massive budgets stiffing the talent behind their polished commercials and shiny new pilots.

How can this happen? Like most broken systems, it’s a collision of culture, business structures, and power.

Let’s start with the business structure in the film and television industry. According to our super secret source who has been stiffed multiple times throughout a very successful career, part of the problem is that production companies are usually hired by advertising agencies who are hired by big companies.

The middle man poses a problem: it’s in the ad agency’s interest to maintain a strong relationship with the hiring company, which means they’re not actually vested in the interests of the production company or the independent contractors it hires.

Furthermore, at the outset, it’s on the production company to lay out huge amounts of money to fund the project. The deal usually stipulates that the production company is paid upon delivery of the work, so what happens, essentially, is that one very small company acts as a bank for a large company. Kind of messed up.

Still, none of this means that the production company and the independent workers it hires shouldn’t get paid. That’s where culture comes in – and there’s a couple ways in which this manifests.

First of all, projects usually come up fast and require a fast turnaround. This means the production company hires a big crew all of whom are working on day rates. Because of the pressure for speed, contracts for each and every worker usually fall to the wayside.

On the other side of the equation, business ethics vary across companies. Especially in some international cultures, paying for work completed seems mysteriously optional. Also, many big companies put a lot of other bills before a production company’s, like their creditors, for example.

Finally, the politics of power in show biz play out aggressively behind the scenes.

This results in the party higher on the totem pole “asking” the lower party if they would mind taking less than they’re owed or waiting, oh, another 3 months. Because you want the business again, you’re hard pressed to be the guy who says “F that. Pay me.”

But know this: lesser payment for previously agreed-upon work is nonpayment.

Hollywood loves a good David & Goliath story, so how about this one –

The freelancers of the film and television industry join the #FreelanceIsntFree Campaign. We work together to pass legislation that would require anyone who hires a freelancer in the business to back up the gig with a contract.

Terms of the contract are pretty straightforward: freelancers get the agreed-upon amount for work completed within 30 days. No discounts. No delayed payments.

The legislation works up the chain – from the production company to the ad agency to the hiring company – everyone hammers down bulletproof contracts. Now, companies are required to pay human beings what they’re owed – before they pay their creditors, or the phone bill, or re-up on the vending machine.

Sound too good to be true? Maybe – but freelancers occupy the majority of jobs in the film and television industry, so what Goliath has in strength, David has in numbers.

Join the #FreelanceIsntFree Campaign – and let’s get our Hollywood ending.