5 reasons why you can't afford to miss the #FreelanceIsntFree Rally 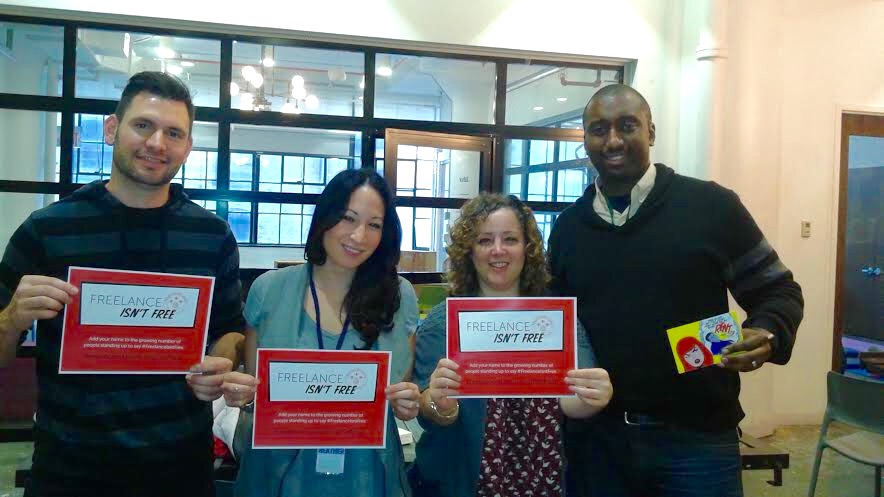 On Monday, December 7 at 12 p.m., freelancers across New York City will gather on the steps of City Hall to celebrate the introduction of the #FreelanceIsntFree bill.

Here are 5 reasons to take that lunch break and join us in showing your support for the #FreelanceIsntFree campaign!

Despite the growing freelance workforce, no other city has made moves to protect freelance rights in nonpayment cases. New York City's move to support its 1.3 million freelancers puts independent workers in the spotlight nationwide.

2. Details will be revealed

OK, so "legislation," what exactly does that mean? #FreelanceIsntFree rally attendees will be the first to hear what the new bill covers -- and let City Council Members know that this isn't the last they'll be hearing from us.

Slacktivism is all the rage these days, but the truth is -- laws don't change because you change your facebook profile picture. Laws are made by people who get up, get out, and fight for their rights.

King of BK poli-cool and bill-sponsor Brad Lander will talk about the importance of supporting freelancers. We are New York's most creative and entreprenuial spirits, after all!

Our own Sara Horowitz will MC the event, which will also include words from other city council members, the leader of New York City's largest labor union, and the founder of NY Tech Meet Up. See the full line-up here.

It's about time to stop chalking up non-payment as yet another hazard of freelancing. It's theft, and it's not OK. You take pride in your work, so it's time to exercise a little respect for your profession and join us on the steps of City Hall to say #FreelanceIsntFree!

See you at 12 p.m. on December 7 - remember to share your pics on Instagram with the hashtag #FreelanceIsntFree!