The future of freelancing looks bright 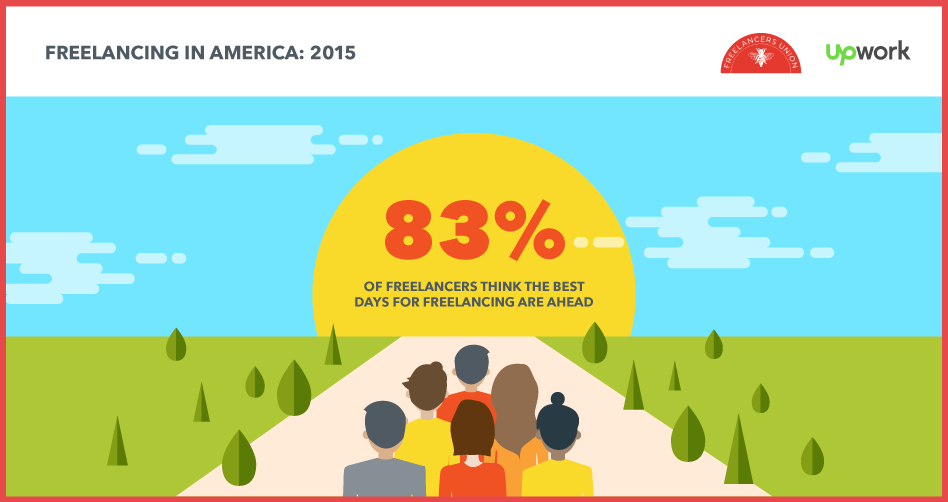 One of the insights that I’ve gained working with the freelance community is that freelancers rarely agree. We’re an independent, diverse and opinionated bunch – and we aren’t afraid to speak up on everything from best business practices to political issues.

It’s always a healthy debate (freelancers aren’t much for tearing one another down), but there’s rarely a consensus.

Which is why I was pretty shocked when the Freelancing in America 2015 study came out and a whopping majority of freelancers agreed that they believe the best days are ahead for freelancers.

That’s right: 83% of independent workers think the best is still to come for this wildly diverse and enterprising workforce.

And why not? Just 2 weeks ago the President of the United States acknowledged us at the White House Summit on Worker Voice.

The #FreelanceIsntFree Campaign is sweeping the nation because, frankly, we’ve had enough of client nonpayment and we’re not a population that can just be swept under the rug.

Our numbers are growing and with them, our contributions to the nation. We’re innovators and entrepreneurs – and we work hard.

It’s only a matter of time before our representatives realize that empowering the freelance workforce will yield massive returns to the American economy.

So while we still face many hurdles – including client nonpayment, double taxation and lack of benefits – as a group, we’re feeling pretty strong and ready to take on the world. Are you with us?

Join the #FreelanceIsntFree Campaign and show your support today!