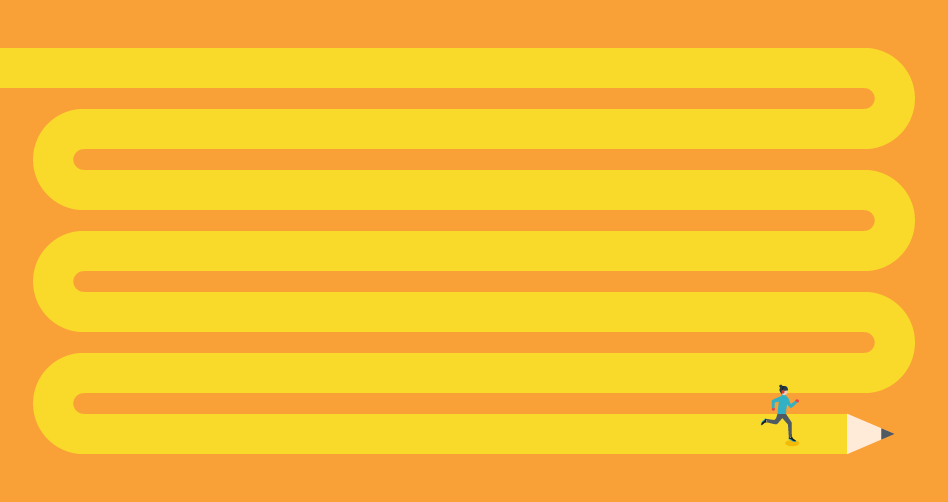 Am I really about to use the most tired metaphor ever?

Yes and no — bear with me here. The parallels between marathon running and freelance writing reach far beyond the “slow and steady wins the race” mentality.

The brutal nature of long distance running is A LOT like the process of becoming a freelance writer.

It looks glamorus from the outside

Prior to training and running in my first marathon, my perception of the long-distance sport was built entirely on positive images.

Finisher photos of friends showed them smiling with a healthy sheen of sweat, a medal around their neck, and a fist full of free cookies and fruit.

The long distance runners I knew occasionally sounded frustrated with the obligation to wake up early on a Saturday and run ten miles, but they always said it with a half-hidden grin that made me think… Hmmm. They’re bluffing. They love this shit.

I saw freelance writing the same way, before I got involved.

My freelancing friends, free from the confines of an office, all seemed to sleep late, travel frequently, and maintain the type of weekday bar schedule I scarcely remember maintaining in college.

Who wouldn’t want in on that?

If only I knew.

People do kinda gross things, but we do our best not to judge

I’ve watched grown women and men pull down their pants in front of thousands of onlookers, and relieve themselves.

I’ve also seen men and women just skip the removal of the running shorts altogether and let it happen en route to that finish line.

It can be kinda gross, but everyone else feels sympathy for a split second, then forgets about it because we’re all running a freaking marathon and our minds are too exhausted to focus on anything but the bacon cheeseburger and beer we’ve promised ourselves at the finish line.

So what’s the parallel to freelance writing you ask?

No. I have never dropped my pants at my desk to save time on bathroom breaks.

But I have written for companies I didn’t believe in, worked for free, worked for disgustingly low rates, and done other things that could very well be considered gross.

Sadly, we often feel forced to do these things in the beginning. The industry today insists that new writers gain experience by “working for exposure” or taking unpaid internships.

And that my friends, is gross.

But if you do those things, I won’t judge. Like I said, I’ve done them, too.

I just feel like we all really need to find a way to install more port-a-potties. Or something like that.

You seek comfort from those running next to you

It was around mile 20 of my first marathon, schlepping through Chicago’s Chinatown, when I succumbed to my body’s irrefutable need to walk.

It felt as though my leg veins were coated in lead and my muscles had turned to heavy clay.

That’s the only reason I kept walking.

But then this guy running next to me started walking, too. He stared at the ground, mouth open slightly, eyes shadowed, as if he had just let down every single person in his life by walking instead of running.

I could feel his devastation as strongly as I could feel my own. Then, he looked at me and smiled.

“Hey, we got this!” he offered, his face suddenly brighter, as if my equally miserable presence had just given him the motivation to keep picking up his feet.

Side by side, we both started running again.

Get in the race! Join Freelancers Union (it's free!)

Having a community in freelance writing is not only inspiring and motivating — it’s absolutely necessary. I know that I personally rely on the support of fellow freelancers.

Just by running next to them — in Facebook groups, on Twitter, or occasionally in person — our shared frustrations and fears of failure allow me to keep moving forward.

That’s a big reason why I’ve started my online course, Blogger to Bylines: A Guide to Freelance Writing.

It’s a seventeen lesson course that offers all of the knowledge I’ve gathered over years of freelance writing, but the aspect of this course that’s closest to my heart is the community I hope to foster.

People know it's brutal, but they still do it

Despite all of the discomfort, exhaustion, and pain that comes with marathon running, those early morning I spent by myself on Lake Michigan, thinking about nothing but the repetition of my steady breathing as the city came to life alongside of me, were times I adored.

I haven’t run a marathon in a few years, but watching others do it and talking about it still makes me yearn for the high that running once game me.

It’s a yearning for a very similar high that convinced me to finally quit my job and pursue freelancing full-time.

Because if you love to write, (or code, design, or anything else you might do freelance) and you want the freedom to pursue those things in your own way and on your own time, then you can’t help but power through the bad stuff to get to the good.

The first time I saw an article of mine that I was really, really proud of appear on the front page of a major website, I was elated.

Marathon running and freelance writing can both be a real drag.

It’s hard to make a living from your freelance writing, you work with editors who will change your voice in a way that makes you cringe, and stability becomes something for your desk legs to achieve — not your life.

But the joy of doing what I love every day has far surpassed the things I’ve endured along the way.

It’s already gotten so much easier, and I love it more every day.

Britany Robinson is a freelance travel writer who currently resides in Portland, Oregon. Her work has appeared in Salon, The Daily Dot, Mashable, and more. You can read her advice for fellow travel writers on TravelWriteAway.com. Or follow her on Twitter for pics of her puppy.