Will freelancers swing the next election? 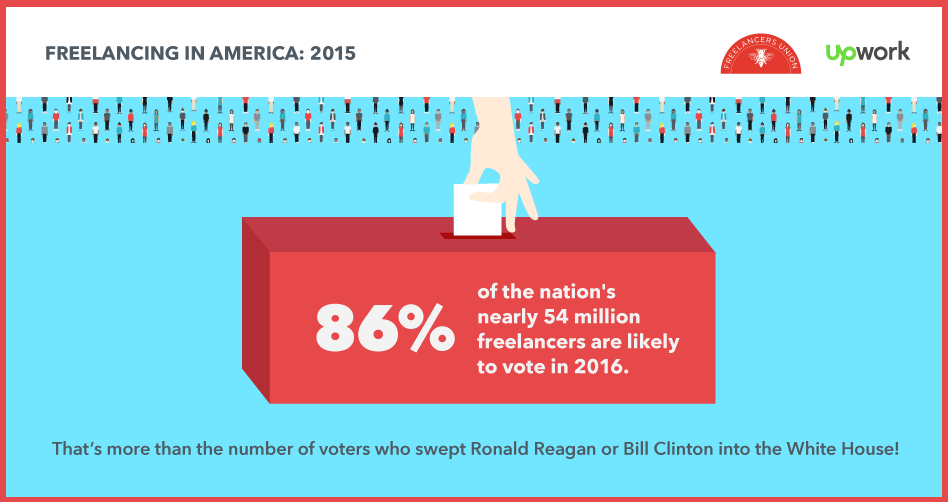 The 2016 presidential campaign is still over a year away, but the race to the finish is already hot. Candidates on both sides of the ticket vie for media attention and endorsements from various voter communities.

Now, imagine if we told one of those candidates that she could sway a constituency of voters larger than the ones that swept both Bill Clinton and Ronald Reagan into the White House.

Additionally, in appealing to this constituency, she would reach people across the socioeconomic spectrum, people of all religions and ethnicities, and people who’ve voted for her opposing party.

Did every candidate’s election task force just come to a screeching halt?

If they didn’t, they should: 86% of the nation’s 53.7 million freelancers plan to vote in the next election. 62% of freelancers would vote for a candidate who supports freelance issues.

So, why aren’t all these media-hungry candidates using the f-word?

If I had to hazard a guess, I’d say the term “freelancer” scares them a bit. It’s new and it doesn’t come with an approved script for talking about the economy and worker issues.

Freelancing is a new frontier – and even the most progressive candidate might balk at presenting himself as an expert on a field that still seems so unexplored.

But we, the members of #FreelanceNation, are not only exploring this new territory; we’re conquering it. We eat, sleep and dream the freelance lifestyle.

Not that it’s so easy – we walk the freelance tightrope with virtually no safety net: we face unpredictable income, double taxation, enormous health insurance costs, and client nonpayment.

But we do it in pursuit of independence and happiness; isn’t that what the American dream is all about?

It’s up to us to gather our collective voice and educate our representatives – not just about our needs as a community, but also the contributions we make to this country on a daily basis.

Let’s shake up this election and put freelancer issues in the spotlight.

Join the campaign and let your representatives know: #FreelanceIsntFree