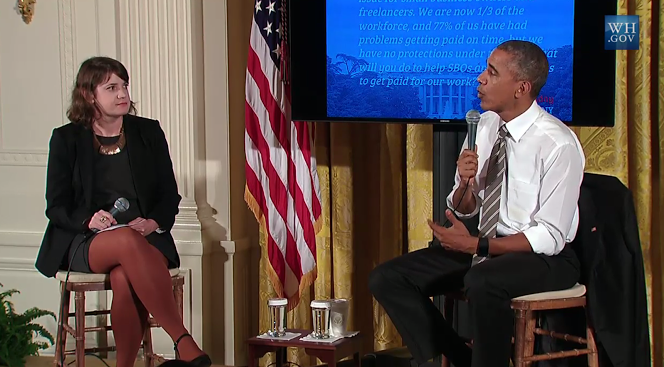 For the American freelancer, this was a big week in Washington.

Freelancers Union Founder, Sara Horowitz was invited to speak on a panel that took place during the Summit on Worker Voice at the White House, hosted by President Obama.

Prior to the event, we asked you to raise your voice and help #StartTheConvo in Washington around wage theft – and the President heard #FreelanceNation loud and clear!

Nearly 100 tweets expressing common freelance concerns, questions for lawmakers, and pictures from the event came pouring in throughout the course of the day.

Thanks to the buzz from #FreelanceIsntFree supporters, the moderator selected a question directly from Freelancers Union member Sunday Steinkirchner via Twitter.

President Obama personally responded to Sunday’s question. Following his comments, the moderator invited Freelancers Union Founder and Executive Director, Sara Horowitz, to announce the #FreelanceIsntFree campaign to the President and the rest of the attendees. Watch the exchange here.

It’s a perfect example the profound difference we can make when we come together.

Thanks to all that took part yesterday!

77% of freelancers have trouble getting paid by their clients. What can be done to change this? #StartTheConvo #FreelanceIsntFree @USDOL

Wage theft is a serious issue. How can we protect freelancers against nonpaying clients? #StartTheConvo #FreelanceIsntFree @USDOL

.@freelancersu @POTUS It would be great if freelancers got the same respect and tax breaks as someone starting a small business.

If we account for 33% of the work force then his omitting us from policy amounts to slapping our collective faces. https://t.co/8fK0TANaQQ

@POTUS @freelancersu We freelancers are out here and we matter! We work long days with little or no line between work and family. #freelance

Peter Hilton is the Social Media and Community Manager at Freelancers Union. When he's not glued to Twitter, he's playing drums, writing, or figuring out a way to fit more records into his tiny NYC apartment. Check him out @PeteHiltonJr