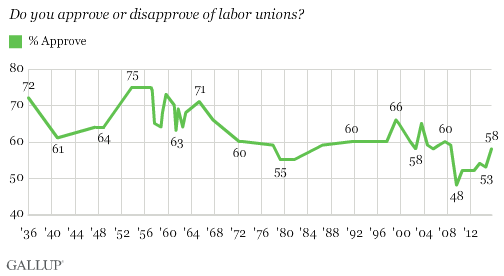 Do you approve or disapprove of labor unions?

That’s the question that was posed to 1,011 participants in a recent Gallup poll, the results of which were released this past Monday.

Their answer? Nearly 6 in 10 said that they approved of labor unions. 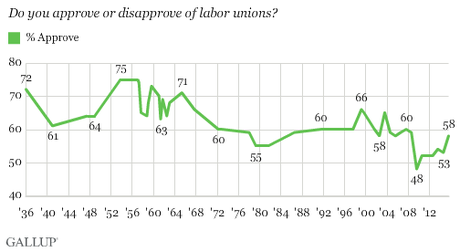 This is significant, as it is the highest approval rating since 2008.

But it wasn’t just approval rating that increased. A majority of participants also expressed their desire for unions to have more influence, which is surprising when you consider the fact that union membership has been declining for decades.

What do you think, freelancers? Does the recent unionization of Gawker and Vice, as well as the rise of alt-labor groups like the National Domestic Workers Alliance and National Taxi Workers Alliance represent a return to the glory days of the labor union? Or in Sara Horowitz’ words, “Are unions retro cool?” Or is this all just a flash-in-the-pan? Let us know in the comments section below! 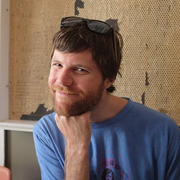 Peter Hilton is the Social Media and Community Manager at Freelancers Union. When he's not glued to Twitter, he's playing drums, writing, or figuring out a way to fit more records into his tiny NYC apartment. Check him out @PeteHiltonJr