The Gig Economy goes to Washington 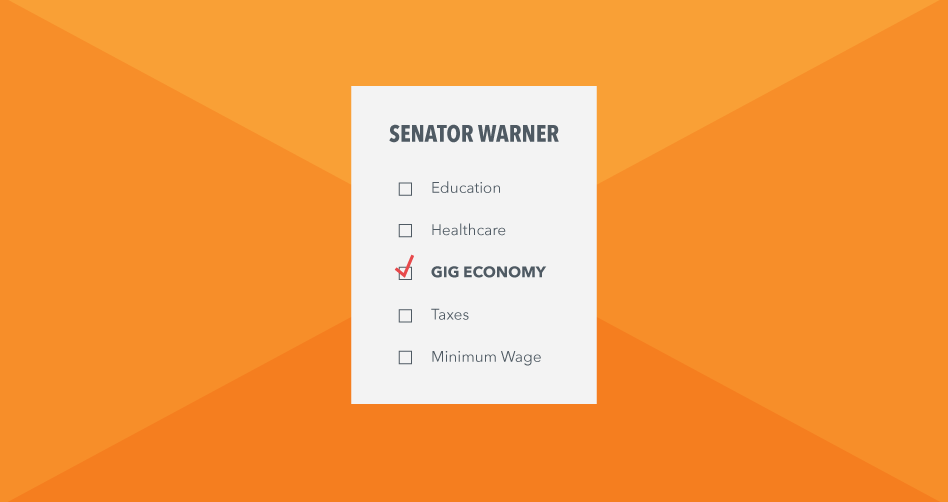 Someone in Washington is finally talking about the issues facing freelance workers.

In recent weeks, U.S. Senator Mark Warner, a Virginia Democrat, has been making news by giving speeches and interviews about what he calls the “sharing” or “gig” economy (a.k.a., the freelancers’ economy).

In a July 6 Washington Post interview with staff reporter Cecelia Kang, former businessman Warner called for more politicians to talk about the needs of a changing economy.

According to some economists, by 2020 about half of American workers will be freelance or contractual. Warner identifies three basic types of workers in this emerging sector:

"There are millennials that we like to talk about as celebrating the choices of part-time work and who don't want to have 9-to-5 jobs and who love working on three to four things at once.

There are the people my age who are forced into this because they lost a good job during the recession and now need multiple revenue streams.

And then there is the third category of people who are probably rolling their eyes saying this is nothing new and they've been working like this for the last 20 years and it's been called 'just getting by.'"

Warner has raised the issue a lot these days. On June 4, he spoke about the topic at the New America Foundation, a Washington, D.C.-based think-tank.

The organization described his comments as “perhaps the first significant speech of any Washington, D.C. policymaker on the potential impact of generational and technological changes on the American economy.”

One senator trying to get a dialogue about the new economy of part-time, freelance workers may not be enough to get Congress as a whole talking. But it’s a start.

David Clarke is a freelance writer with more than 20 years' experience as a journalist covering environmental policy. His current gigs include work as a Senior Editor/Writer for The Scientific Consulting Group, Inc., and as the Federal Beat feature writer for The Environmental Law Institute's Environmental Forum magazine. In addition, he has written book reviews, encyclopedia articles, speeches, blogs, and other published work.