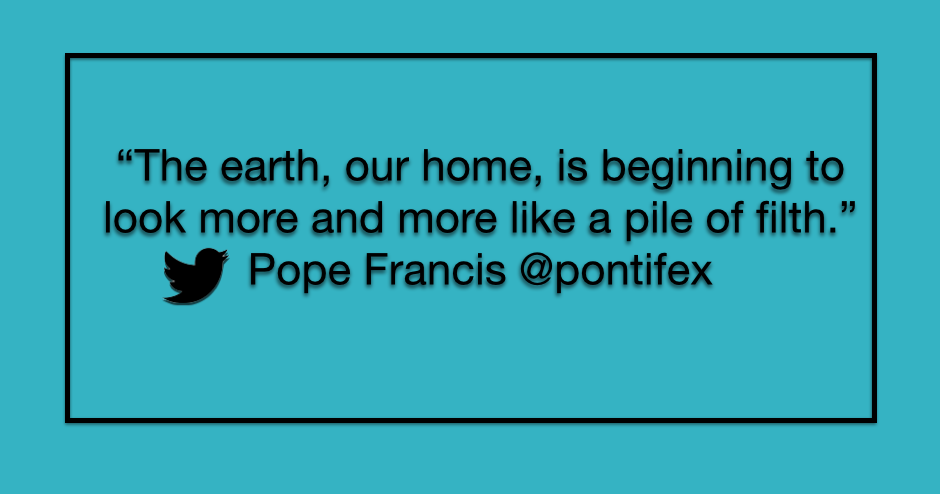 On June 18th, after the release of his much-anticipated encyclical, Pope Francis took to Twitter. There, he shared an abridged version with his 6.4 million followers. One of those tweets went viral, garnering upwards of 32,000 retweets:

"The earth, our home, is beginning to look more and more
like an immense pile of filth." - @Pontifex

This pithy, 17-word summation of a 187-page document is perfectly tailored to rally twitterers, yet the punch in the gut is not Pope Francis’ potent metaphor, but rather the phrase “our home.” It’s clear: he’s not talking about some far-flung place or planet, he’s talking about home. Not yours. Not mine. Ours.

He riffs on this notion of our collective ownership over the fate of the earth over the course of a number of tweets (the papal version of a Twitter rant). What’s at stake, Pope Francis tweets, is our dignity as individuals, as a community and as a species.

Pope Francis also makes the case that climate change and growing poverty rates are inextricably linked. As Elizabeth Kolbert summarizes in her recap of the encyclical for The New Yorker, “Both environmental degradation and global poverty can be traced to a way of thinking that regards the world as a means, rather than an end.”

As freelancers, most of us astutely distinguish between means and ends: Money is a means, but not an end. We simply wouldn’t be freelancing if we were just in it for the money. Time is an end. Freelancing allows us more time to explore our passions and the greater world. The world is an end; our ingenuity and motivation a means.

In fact, if we applied the principles of freelancing success as we’ve defined it here at Freelancer’s Union to Pope Francis’ vision for the world, we just come closer to realizing it.

The Freelancer’s Pyramid of Self-Actualization illustrates a kind of freelancing Nirvana wherein, at the top of the pyramid, the self-actualized freelancer has achieved “success” in the form of a sustainable, well-rounded and fulfilling lifestyle.

Join the union (it's free!)

But even those of us who are still hustlin’ at the bottom of the pyramid know intuitively that being a solopreneur doesn’t mean going it alone. We rely on our network for sustenance—and not just as a conduit for potential clients, but also as a community with whom we can commiserate, partner and share.

We get and spend less because we know operating a lean business is integral to success. And even if we do achieve great financial wealth, we rarely give in to the largesses of corporate culture because we’ve discovered more meaningful ways to fill our lives.

Finally, as freelancers, we must be full of self-blessing. We bless the bud that doesn’t germinate into a business. We retell it, again and again, until it flowers. We learn to live with dignity for ourselves, for our business, for our homes and for our communities.

In his encyclical, Pope Francis describes a person who could afford to spend more and consume more, but regularly uses less. In winter, she wears more clothes and uses less heat. In summer, she opens the windows. This is love. This is self-actualization and that is impossible without placing one’s self at home among others on earth.

How do you think we can approach a better world together? Share your ideas in the Sara's Social Good Think Tank Hive.