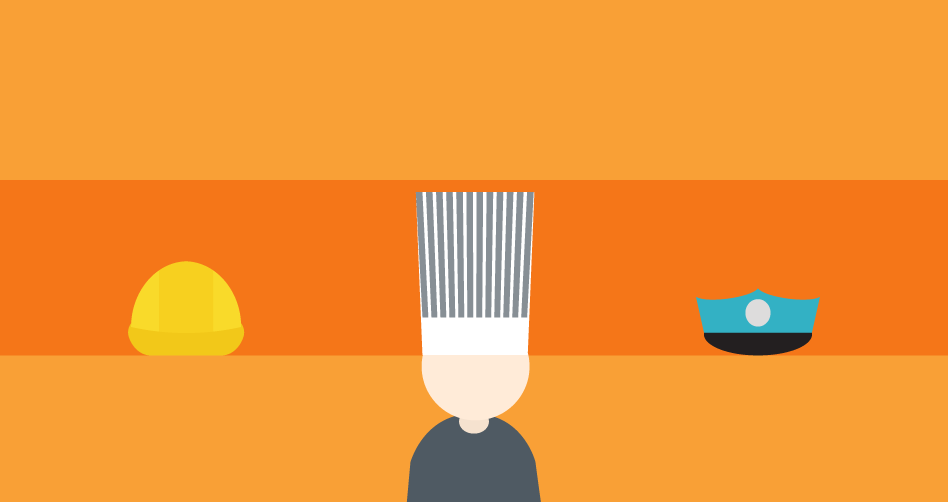 Like most freelancers, I cobble together a hybrid-living from several different gigs at any given time. In my day, I’ve had many many jobs; some vaguely glamorous, and some downright humbling. I’ve taken away important lessons from both current and past gigs. A few examples are below!

From acting, I’ve learned many things – but one of the most valuable is that everyone – EVERYONE – has a rich backstory and an emotional life worth exploring. That exceptionally boring dude you’re forced to deal with at every mutual friend’s gathering? I bet he has some fascinating secrets lurking in his closet… that’s why he’s so buttoned up.

It’s something to keep in mind as you bump around in this world; that everyone believes they’re trying to do the right thing, and that everyone is struggling. Be empathetic; you probably have more in common with Captain Boring that you realize.

From writing, I’ve learned the importance of pursuing what I find intriguing, what I find amusing, what I find inspirational… versus what I posit other people might like. People like passion – they like a point of view. Go after what fires YOU up. Your work will be more enjoyable, and more interesting.

It doesn’t much matter if people LOVE your stuff or HATE your stuff; if they write you lovely, thoughtful messages or post the nastiest, most cutting messages imaginable. From blogging and work in social media, I’ve learned that some people will like you, some people will loathe you with the fire of a thousand suns, and most people are too wrapped up in their own lives to worry about you.

Other people’s opinions don’t really affect you unless you let them. Just do your thing.

Ohoho, I learned so much from nannying over the years… including the importance of keeping an eye out for unlikely disaster scenarios, the value of a Wet-Nap, and the troubling effect of sugar on small nervous systems. What resonated the most, though, is that the best employers treat you like an equal; like a member of the team.

The last nannying job I ever had was with a lovely, cool boss; before her were some cases that would make excellent fodder for a tell-all novel. If someone does NOT treat you well, get out – you’d be surprised how many decent bosses there are in the world.*

*PS: if you use babysitters and don’t treat them well – or even have a niggling doubt that you don’t – don’t do that. What’s wrong with you? They’re taking care of your kids, who presumably are rather important to you. Treat them like equals!

From my stint as a waitress, I learned to be considerate to strangers, and ALWAYS ALWAYS TIP WELL.

Waiters and waitresses constantly smack up against an unpleasant phenomenon; that some customers take advantage of the smallest imaginable position of power in order to be jerks. DON’T BE THAT PERSON.

The entire tip system is an antiquated form of remuneration, and waiters/waitresses have to deal with a lot of sexual harassment, back-breaking work, and general irritation – all with a smile. Tip generously, and be nice.

Be considerate and polite not only to people who are handling your food, but also to ANYONE who helps you out. It’s good karma.

From tutoring kids for years, I learned that underestimating people is a surefire way to get underwhelming results – but that if you believe in your team, you’ll be surprised by what you get back.

I also learned the importance of play: not only in kids, but also in adults! Children and grown-ups who aren’t allowed breaks become antsy or listless; they don’t do their best work, and they don’t absorb information well.

If you’re put in a position of leadership, make sure to schedule relaxation and free time as well as work… and invest emotionally in your team’s development.

Many years ago, I had a job flying a tiny helicopter up and down in a rather well-known toy store, for hours and hours every day. Every day of that gig, strangers would say: “THAT looks like a fun job!”

From this, I learned never to project my own expectations about people’s professions onto them; gigs are a temporary, incomplete expression of who a person is.

You don’t “know” somebody just because you know what an IT consultant is like, or what an artist is like. Take people on their own merits.

Because MY GOD flying a tiny helicopter for hours on end for a low hourly wage is miserable. I used to wish I could climb into that eensy-teensy helicopter and chopper myself right into the blink-y offensively neon Toyz sign… going out in an eensy-weensy adorable blaze of glory.

Temping reinforced for me a lesson about productive unhappiness; how sometimes, you can channel dissatisfaction with your career in a positive way. As a temp, I was often dropped into random office environments – a stranger in a strange land. Often, I saw management in those offices make bad, counter-productive decisions.

But I also saw workers who not only accepted those decisions as inevitable (which was often understandable, given their environment), but who had also given up on a larger level, resigning themselves to working jobs they hated. They often took frustration at the status quo out on each other; backbiting and antagonism was more common than searching for better jobs.

I do NOT judge these workers; bad work environments can weaken your resolve to change anything, including your circumstances. And I was certainly no better; I was miserable while temping, and for a time I let that misery overwhelm me. I did do one good thing, though; I turned down several “stable” permanent jobs that would have made me desperately unhappy.

Indeed, after a while (probably too long), I used my unhappiness as fuel to start looking for new work… work that ultimately led to full-time freelancing. Would I have gotten there without such complete despair? I don’t know! Now I can look back and be grateful for that dark time… although I have no wish to return.

These 8 lessons affect not only my career, but also my day-to-day actions; they make me a kinder, more empathetic, more productive freelancer.

Most freelancers I know have the same kind of checkered career history – and their current work only benefits from it. What lessons have you carried away from your best (and worst) gigs – and how does it help you now?