How artists can help each other stay healthy 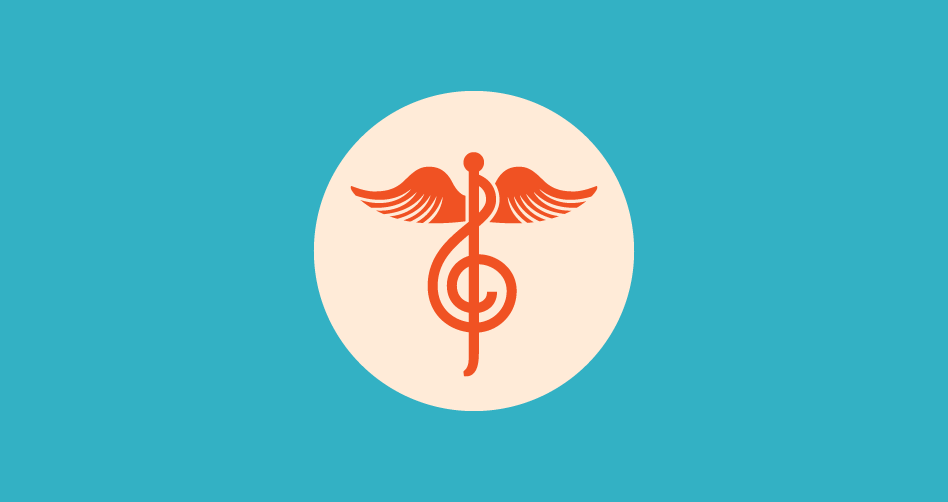 A few weeks ago, my local music community in Maine lost yet another young and talented colleague to suicide.

We musicians spend a lot of time together practicing, eating, performing, and traveling. Bands are 1/3 team, 1/3 business, and 1/3 family. So when, in just over a year, we lose two wonderful teammates, it's hard not to wonder how many other individual musicians need help and aren't getting it.

When I mentioned this to a colleague in the medical field, his response was, "Of course! Most of you don't have health insurance and never visit the doctor, and all those untreated medical issues can lead to emotional problems."

This conversation led me to research the topic of musicians and health - and what a rabbit hole that was. In this blog post (/research article /essay /plea to fellow artists), I will give an overview of some of the issues musicians are facing and offer suggestions to address them.

Of course I don't have all the answers and I don't mean to preach, I just hope this will open up an important conversation within the music community about self-care and resources for help.

Being an artist is a tough career choice. Sometimes, it's not a choice -- art is something one is driven, compelled, to do; no other choice. But in order to pay for food and rent, many artists must take on a 'day job', draining them of the energy needed to create. Others work in bars and restaurants, or take on part-time physical labor. Overall, 33% of musicians surveyed in 2010 said they had no health insurance. Compared to the national average of 17%, that's a high percentage of people with no (or expensive) access to medication, checkups, and proactive exams of lingering problems.

(Note: I'm sure this number has changed with the new healthcare laws, but even so the system is not easy for freelancers to navigate.)

Why does health insurance matter? Without any giant tumors or bad falls, why go to the doctor?

Let's begin with the emotional roller coaster that can come along with being a musician of any genre. Musicians are under the scrutiny of the audience, their peers, the conductor or composer, and worst of all, the self. This can lead to performance anxiety, some amount of which is beneficial to performance, but too much of which is debilitating.

Not everyone experiences 'stage fright'. It depends on the performer's gender, age, and self-concept, their task efficiency (preparation, learning styles, coping strategies, and difficulty and value of said task), and the performance environment (audience make-up, expected exposure, etc.).

There is an interesting theory of anxiety in sports psychology called the multidimensional model of performance anxiety. It's made up of:

Somatic anxiety: that jittery feeling you get in your body right before you get on stage. That usually goes away once the performance starts.
Cognitive anxiety: the kind that can stick around, the part that deflates your self-confidence and leads to mistakes.

People who experience a high level of performance anxiety often also experience an anxiety in social situations. Cox and Kenardy (1993) found that 50% of the musicians in their review were socially phobic. These two settings for anxiety share certain characteristics, such as lack of control, fear of negative evaluation, and fear of crowds. An article from the UK in Psychology of Music likened musical performances to academic examinations, with shared characteristics including fear of failure and potential loss of status. However, musical performance anxiety is "a more complicated construct because performance is evaluated in real time" (Chan & Ackermann, 2014).

So why does this all matter? We all experience some levels of anxiety or burnout as workers in very public settings. Dobson (2010), in an article on musicians' perspectives on their profession writes that "socializing professionally was identified as a key means of advancing work prospects, in which alcohol consumption often played a strong role." Sound familiar? Alcohol and other substances are used as a way to gain relief from the long days and late nights, to connect with other musicians, and to relax the nerves before getting on stage to perform. And there are often adoring audience members who deliver shots of whiskey to the stage between songs. Rehearsals often begin with marijuana being passed around; after parties can boast cocaine to keep the party going late.

This frequent and easy access to substances has negative consequences that are often overlooked. If it doesn't feel like a problem, it isn't, right? Not necessarily. Frequent alcohol and drug use can lead to physical issues -- some simple, like weight gain, some complicated, like brain damage. In cocaine-dependent individuals, the brain loses 3cc of gray matter per year. That's less than a teaspoon, but wouldn't you rather have ... all of your gray matter?

A lot of research has been done on artists and psychological disorders. There is some overlap in the mental processes involved in both creativity and psychosis proneness. Mainly, a reduced latent inhibition (tied to high levels of dopamine), that allows us to treat something as novel no matter how many times we've seen it. Some bipolar artists will stay up writing all night in the manic phrase, and when that phase ends with a crash, they become agony-filled and criticize their work to a dangerous extent. Artists with otherwise healthy brains will sometimes induce these manic mental states by taking drugs. Graham Nash (of Crosby, Stills, Nash and Young) writes in his autobiography, "Weed unlocked my mind and my emotions, which had to be awakened for me to start writing meaningfully." This becomes self-destructive once your brain's reward system has become desensitized with repeated exposure to the drugs that activate it. At that point, you're just taking the drug to "avoid activating the brain's pain and stress circuitry that are stimulated when the drug is withheld" (Fields, 2013).

Is it worth it? Do you think, like Nash and Crosby, that you're less creative without drugs and alcohol? All said, "there is very little evidence suggesting that clinical, debilitating mental illness is conducive to productivity and innovation" (Stack, 1996). And since taking drugs to enhance creativity is essentially deliberately inducing psychosis, I suppose the answer is no.

Alongside the emotional strain brought on by performance anxiety, and the substance abuse and subsequent cognitive health problems, musicians also have physical issues to deal with. 30-50% of musicians report noise-induced hearing loss, and many also experience tinnitus. In a survey of music students and medical students, the music students reported more pain in wrists, shoulders, neck, jaw, and mouth, as well as right hand and left elbow. Repetitive movement in practice of an instrument can lead to musculoskeletal pain and injury. A 2014 article on evidence-informed physical therapy for musicians states that "challenging and higher-intensity repertoire should be practiced in shorter durations with frequent rest breaks or with easier repertoire in between."

Planning out your practice schedule with rest breaks can help avoidance of muscle fatigue or overuse injuries. Cardiovascular and resistance exercises will help you stay in shape and also lead to better posture, something you can practice. Better posture will help with your breathing endurance and control, something singers may be aware of but instrumentalists may tend to ignore. Good posture also keeps your muscles from overloading.

This post may make it sound like being a professional musician is a disaster waiting to happen. In reality, we are some of the luckiest humans around. To be born with a talent and a strong passion for that with which you're talented, and then the drive to go after it is priceless. Unfortunately, the settings in which we play often present us with situations that are red flags for the health and wellness related issues described above. Here are some gentle suggestions for dealing with them:

No one is perfect, and there is no shame in needing help. Surround yourself with a supportive team, and when you need help, ask for it. There are a number of free community resources for getting help with depression, substance abuse, and physical problems. (If you have favorites, please send them to me and I'll post some here!)

Be honest about who you are as a person and as a musician. If you're uncomfortable in a playing situation, can you get out of it? Similarly, are you being too hard on yourself? Keep in mind that every individual musician, no matter what they present to the public, is going through their own process of developing musical and personal skills. Think of music like a sport. You're on the team, so you need to contribute, but you should only compare yourself to yourself. You won't get better if you give up because you talked yourself out of trying.

I know a lot of friends get annoyed at me for calling them out about smoking cigarettes. (Hey, I work with cancer patients!). I'm sure the same goes for alcohol and drugs, we generally leave each other alone about it. And plenty of people are doing just fine, under control. But is 'under control' the healthiest way to go? All I suggest is being a bit more aware of your intake. Just like with food, these substances can affect your overall health and longevity. Think about why you're drinking seven PBRs a gig, and when you find the reason, see if there might be another way to deal with it. If you don't have a reason to drink seven PBRs, why not save those calories? Find ways to have fun and reach your creative peak while still treating your body with the respect it deserves. I know life is short, but wouldn't it be cool if you could still be getting hired for gigs at age 75?

If something hurts, get it checked out. I agree that doctors, dentists, audiologists, etc., are expensive and we need more resources for musicians to access these services (see: Health Alliance for Austin Musicians). In the meantime, at least go to the dental school, the free clinic, buy some earplugs, try acupuncture, whatever you need to do... Physical ailments can actually worsen psychological issues, leading to depression. You know, that whole mind/body connection.

Kate Beever is a board-certified music therapist and percussionist. She studied at NYU and returned to Maine to open a private practice, Maine Music & Health, while keeping up an active schedule of speaking engagements and performances. Kate also likes paddling and hiking. Visit her website, http://www.mainemusicandhealth.com/.

Chesky, Dawson and Manchester. Health promotion in schools of music.

Kok, Vlieland, Fiocco, and Neilssen (2013). A comparative study on the prevalence of musculoskeletal complains among musicians and non-musicians. BMC Musculoskeletal Disorders, 14(9).

Parncutt and McPherson (2011). The science and psychology of music performance. Oxford University Press.