Sell your house, start your business: An interview with the artist behind Zen Pencils 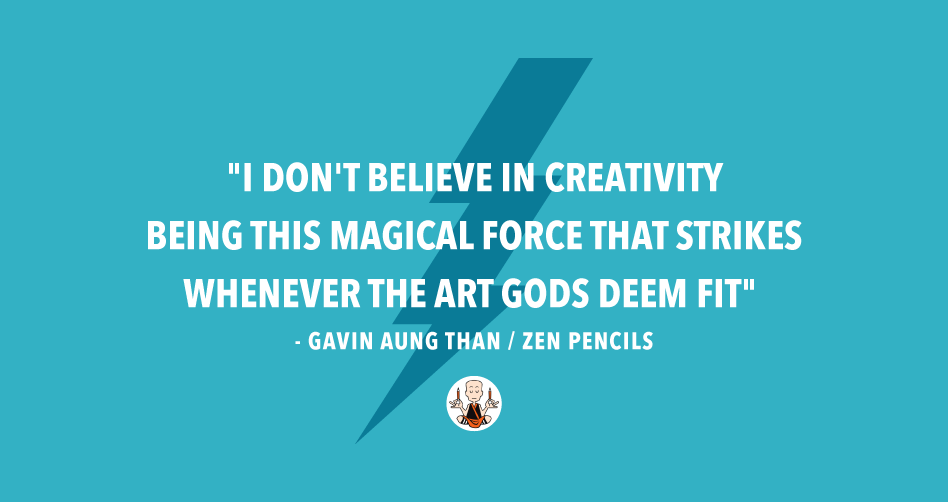 Who knew that comics and inspirational quotes could make for such a winning combination?

It’s such a simple idea -- one that makes you wonder why you didn’t think of it first.

The simplicity of it is just one part of what makes Zen Pencils so great. It’s accessible, it’s universal -- but more importantly, it makes you wonder why you aren’t working on your own art.

Last week, the master artist behind Zen Pencils, Gavin Aung Than, was nice enough to take some time out to chat with me.

If you haven’t heard of Zen Pencils, do yourself the favor of checking out his website and his beautiful new book which includes 170+ pages of his comics -- and even includes a free poster!

Here’s what Gavin had to say:

Did you have a full-time job before starting Zen Pencils?

Yes, I was a graphic designer for a large newspaper organisation. I did infographics and magazine layout. I was working in the industry for a number of years and was totally not enjoying it anymore. I wasn’t using my creativity, had no control of my vacation or work hours and was flat out miserable.

My situation was a bit different to the usual freelancer. I wasn’t working on Zen Pencils as a side gig while maintaining my normal job. There was no transition period. I was so desperate to change my life I quit my job and sold my house to start Zen Pencils full-time. The money from the sale of the house allowed me to survive for six months without looking for another job. Thankfully, I’ve never had to go back to ‘real’ work.

It seems like you built a strong presence on social media in a really short period of time. What should all freelancers know about promoting their work on social media?

Make things people want to share with others, and make things easy for people to share with others. Be transparent, share your creative process and a bit of the person behind the work. People are looking to connect with others on a more personal level these days. Of course, I'm not telling you to expose your WHOLE life to potential clients -- you can decide how open you want to be.

When did you start drawing? When did you realize that it was something you could make a living with?

I've always been drawing. I was always that kid doodling on his homework during class. Honestly, I never truly believed I could make a living with it -- it was always a dream. I went down the more realistic path of graphic design, studied it after high school and worked in that industry for many years. During that time, I was always practicing cartooning, had some modest success getting some comics published in Australian newspapers and constantly worked on the craft. I noticed a handful of online cartoonists making a living with their comics (The Oatmeal, Penny Arcade, XKCD, PVP, Cyanide and Happiness etc) so I knew it was a possibility. Eventually, I was so miserable at my graphic design job I eventually decided to quit to try and follow in their footsteps.

What artists influenced you initially?

Too many cartoonists to name, but probably Chuck Jones, Hergé and Bill Watterson were the 3 big early influences.

Where do you find all of the great passages and quotes that you base your comics around?

Initially it was from various books I read, or Wikipedia pages I stumbled upon. These days, I get most of them from my readers, who submit their favourite quotes.

You draw comics -- so who is your favorite superhero and why?

I'd have to go with Batman. He's the ultimate fantasy -- dashing millionaire playboy by day, ass-kicking vigilante by night!

How valuable has your network been to the success of Zen Pencils?

It's been of great use lately when I needed to promote my book. I used to work in newspapers, so I have a lot of media and journalist friends. They've helped get my work featured in print, radio and television. Also, thanks to social media I've connected with a lot of cartoonists and bloggers from all around the world who have helped spread my work tremendously.

What’s the worst part about working for yourself?

Working alone. It's the best and the worst part. I love being alone, totally focused on my work -- it allows me to get things done and just concentrate on making cartoons. But some days I miss the social interaction of the work place. I might break things up in the future and use a co-working space one or two days a week to prevent me from turning into a slobbering recluse.

What do you do when you have no idea what to draw for a cartoon? How do you keep the creative juices flowing?

I don't believe in creativity being this magical force that strikes whenever the art gods deem fit. If I can't generate an idea from a particular quote, I move on and choose another quote. Or if there's a day when it's really not happening creatively, I'll work on something else work-related -- maybe answer a few emails or work on some of my merchandise designs -- and come back to the problem later. Even though I don't have strict deadlines like a lot of other comic strip artists, I try to get a new comic out every 1-2 weeks. I find having that deadline FORCES the creative juices to keep flowing!

What advice would you give to other creative individuals thinking about starting a business selling their art?

Go for it! If you've been thinking about setting up your own online store, blog or website, there's been no better time to do it. Thanks to on-demand printing services and cheap and easy to use ecommerce platforms, there's little up-front risk and opportunities online are endless. However, even though the internet is making it easier to get your work seen, it also means there is way more art out there, so you have to be really freaking good to stand out from the rest. Also, find your niche, or as Seth Godin says it: find your 'tribe'. Find what really excites you and find others online who are into in the same thing and cater your work towards them.