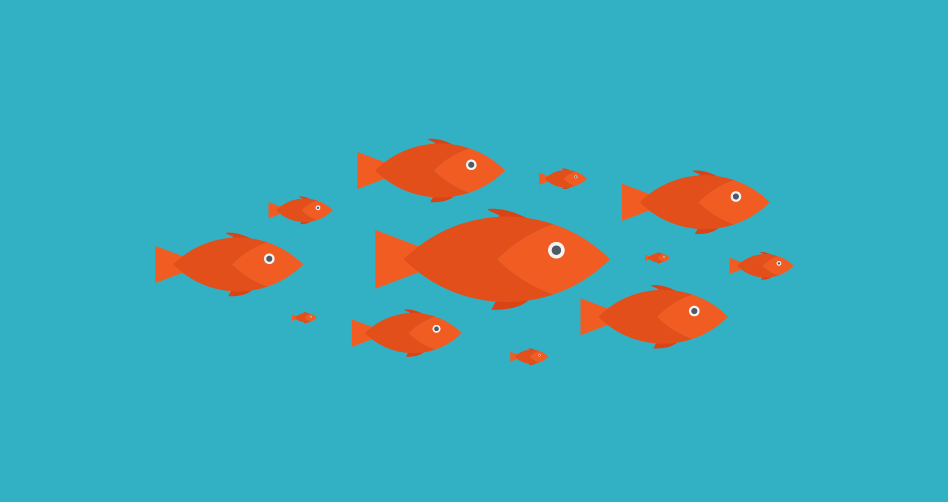 The open ocean is a dangerous place. First of all, it’s huge. Though it’s finite, anything shy of a blue whale feels pretty tiny, floating around in something too huge to comprehend. In fact, blue whales probably feel pretty tiny, too.

The sea is full of predators-- no matter how big you are, there’s something bigger or faster or deadlier than you. And there’s no place to hide: away from coastlines or underwater trenches, there’s no cover; just the open sea.

So what do you do if you’re, say, a little fish? An intrepid, foraging fish, with a shiny coat of scales and an eye toward not only surviving, but thriving? A fish facing down the pelagic zone-- the area of wild, open ocean that can span eight thousand miles deep?

You shoal. Or school. It depends on what you want to get done.

Shoaling is when small fish with similar interests and goals-- staying alive, foraging for food, or finding mates, for example-- loosely combine, moving together as a group. As a large body moving through the open sea, a shoal of fish is more likely to survive attacks from predators, and though the fish might forage individually, they still relate to each other as a social network. Shoaling is how many small species of fish survive and thrive: there’s safety in numbers.

But say you’re a fish, or maybe in a group of fish, that really wants to get it done. Then you school. Schooling fish move in a tight, organized formation, synchronizing their movements to travel with the least amount of energy wasted. Foraging fish often hunt in schools, even spacing themselves the precise length of the jump distance of their prey to hunt efficiently. Now that’s strategy.

Schooling fish move as one organism, capable of performing complex maneuvers, confusing predators, and hunting even the most elusive prey. They’re dazzling to watch: a school of brilliant silvery, shiny fish, moving with terrifying speed, in concert-- doing as a group what they could never do alone. Sure, this world is also home to sleepy koalas and three-toed sloths, but sometimes nature really knows how to stage a drama.

What can we learn from shoals and schools? Well, it’s clear that groups are flexible. They can move in loose configurations, socializing and eating together, as shoals of foraging fish do. Or they can mobilize and move in tight formation, executing plans too complex for one organism to manage. And another, possibly too-obvious lesson: these shiny fishes are a lot better off in a group. Even just their survival rates en masse are far higher than if each little fish were alone.

In a way, we humans have our own form of shoals and schools. You could call it something fishy, or you could call it New Mutualism. We might not be as beautifully coordinated as pelagic-zone foraging fish, but we’ve got co-ops of all kinds, from banks to groceries; we’ve got coworking spaces and skillshares and unions. We’ve even got synchronized swim teams-- take that, fishies. And our brains are a lot bigger.

Anyway, if you want, we wouldn’t mind if you swam with us at Freelancers Union. Come join Hives and find your shoal… or school. However you’d like to fin-esse it.

Larissa Pham is an artist and writer based in Brooklyn, New York. She works at the Freelancers Union.