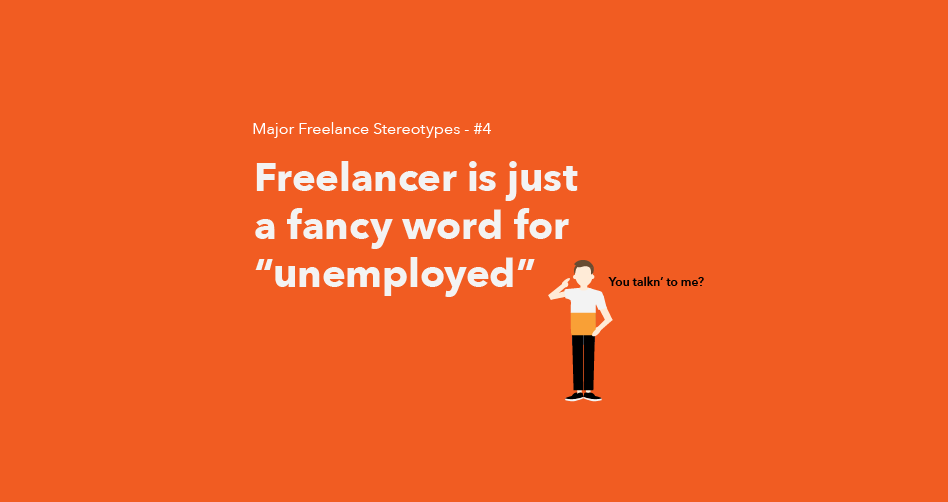 Working as a freelancer, one comes up against a number of preconceptions people have about freelancing (and the strange creatures who do it more or less full-time). Below, I’ve examined some of the most common Freelance Stereotypes I’ve encountered over the years – and tried to clear up some of these misconceptions.

Ah yes, waking up at noon and eating bon-bons by the pool all day – while the money pours in! What sucker wouldn’t want to live such a lifestyle?

Truth: I wish this one was true. Most freelancers have to work pretty hard to earn their living – not to mention the many, many hours spent on unpaid work (hustling for new clients, networking). I do enjoy being free from offices (fluorescent lights give me hives), but I’m hardly making millions. And the freelancer who sleeps until noon is probably the same night-owl freelancer working until 3 AM.

**Sterotype 2: **Freelancers live a life of grasping poverty, constantly anxious about their next job

People who tend to believe it: People who have a very steady paycheck, people with inherited wealth, your concerned Great-Aunt Edna (did you get that check she wrote you for $20?)

Poor freelancers, shivering in garrets over their single can of unheated beans! WON’T SOMEBODY THINK OF THE FREELANCERS?

Truth: There are definitely drier times, especially when you’re first beginning to freelance – but most people who freelance full-time have figured out how to make a living (even a relatively comfortable living)! If it’s not sustainable, people supplement freelancing with part-time jobs or find full-time jobs – but most people who describe themselves as “freelancers” on a more permanent basis have developed a real business, wherein gigs lead to more gigs. I turn down more work than I accept; and I know I’m not alone!

People who tend to believe it: Ugh, this one - judgmental people who have never worked with freelancers before? People who have worked in one career their whole lives?

Truth: It takes SO much focus and dedication to be a successful freelancer – and most freelance entrepreneurs are creative, passionate people who work their tails off. People who “dabble” in freelancing tend to be pursuing hobbies (at least at first); people who have the drive and skill and verve to turn their passions into self-steered careers are anything but flaky. Most freelancers are on top of all of their stuff – and they have a LOT of stuff to keep track of.

**Stereotype 4: **Freelancer is just a fancy word for “unemployed”

People who tend to believe it: Old men who say “get a job”, paranoiacs, the uncompassionate.

Truth: First of all, there is no inherent shame in being unemployed. Almost everyone is at one point or another, and being between jobs shouldn’t make people question their self-worth. It is an extremely ugly, nasty thing to be critical of people who are looking for work, and it is bad karma. If you regularly disapprovingly sniff at the “unemployed”, as if they’re some faceless sponging mass and not human beings trying to make it in this often-turbulent economy… check yourself.

Second of all, some people who are freelancing ARE in fact, in between jobs! That’s okay! They’re supporting themselves in creative, self-propelled ways! That should be applauded! But many freelancers choose to freelance full-time (and, in fact, turn down conventional jobs to do so), because they love the freedom and independence.

People who tend to believe it: Social butterflies, freelancers who haven’t left their house for four days (“I’m becoming a weird loner.”)

Truth: This one… I will give way on, a little bit. YOU CAUGHT ME, STEREOTYPERS!

Human beings are social animals. When I work alone from home too much and don’t get out and go to a class or an audition (or even visit a coffee shop), I do indeed get a bit weird. Talking to myself! Playing elaborate, Mephistophelian pranks on roommates that take hours to set up (I once Googled “realistic rubber snake” for two hours)! Jumping all over my boyfriend like a golden retriever when he gets home (“Hi! Hi! Hi! What did you do today? Where have you been today? Talk to me, talk to me!”)!

If you freelance full-time, it’s important to create opportunities to interact with other people face-to-face. Otherwise you do risk becoming an invoicing cave-creature.

What about you, freelancers? What freelance stereotypes do you encounter – and how true do they ring?