Find your circles: get gigs, get help, and fight isolation 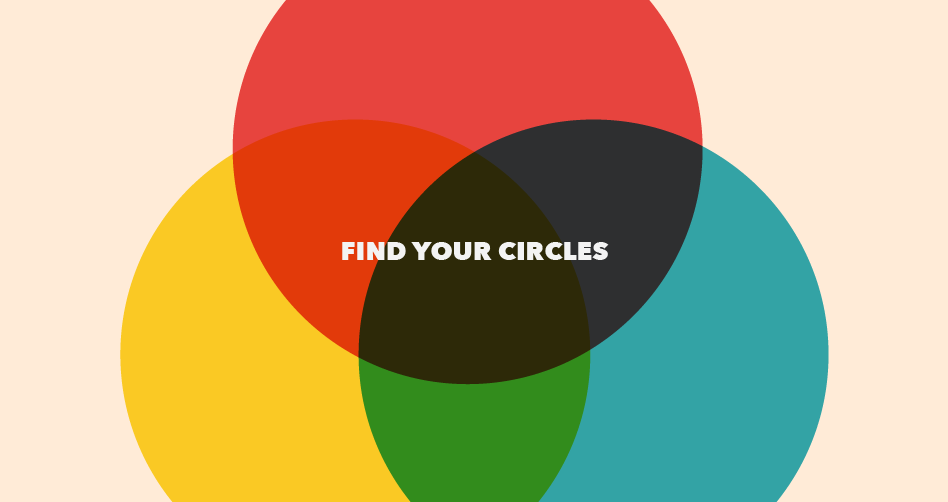 I don’t know about you, but I’ve often found the whole concept of “networking” somewhat impenetrable. How would I get myself out there without sounding like a used car salesman?

Should I wander into a crowded room and start passing out business cards? Stand on a chair and start yelling out my résumé, line-by-line? Wear a sandwich board that says “WILL WORK 4 U”?

Networking has only recently become easier for me, because I started coming at it in a more organic fashion. I did this by finding an alternative to “traditional” networking – the glad-hand, the slick pitch, the pile of business cards. All of that just doesn’t work for me. What does work for me?

Circles are small groups of people with whom you share common interests or traits – allowing you to build strong bonds that transcend one-time gigs. Finding your circles enables you to develop a social structure that supports you – one that you support, in return. It replaces conventional “networking” (a fairly mercenary, self-oriented activity designed to drum up business just for YOU) with community- and friendship-building. It allows you to develop rich, meaningful connections.

I used to feel like I needed to network by blindly making contacts and hoping that some of them panned out. But without firm commonalities, those connections were pretty fruitless. When I started finding my circles, gigs started materializing more and more often – and even when I wasn’t able to take them, I was able to pass along jobs to others in my circle, strengthening the whole group.

A particularly helpful circle for me, for instance, is a group of female freelance writers and editors that I joined recently. We all deal with similar work issues and all share commonalities (as well as a commitment to helping female wordsmiths gain visibility). When opportunities arise, we alert each other. That circle has gotten me some great gigs – and I’ve, in turn, opened up those doors for others.

What’s so nice about circles is they’re not mutually exclusive; I’m part of the aforementioned women’s circle, but I’m also part of many other groups. Each circle (whether organic or organized) has proved more valuable personally and professionally than any cold job interview or networking-for-networking’s sake ever has. Being part of a circle takes the icky hard-sell feeling out of networking; you take, yes, but you also give.

Think of it this way; if you walk into a room with 100 people in it, some of them will be looking for freelancers – and some won’t. You could interview each person, one by one, and see who bites; or you could find friends, people with whom you have genuine common interests. Who’s more likely to think of you if a gig pops up – the mercenary connection, or your buddy? Genuine connections are about one thousand times more likely to pay off than manufactured ones – and they’re better for your spirit, too.

Circles can be defined by industry, location, or common interest; heck, there’s probably a thriving community to be found in freelancers-who-love-Star-Wars-regalia. It’s like finding a whole new group of friends to work with and bounce ideas off of – and who doesn’t like that?

Make a list of things you’re particularly interested in, or things that set you apart from the crowd. Are you a female+freelancer+blog commenter+ designer+sculptor+foodie+living in Brooklyn? Start looking for groups and meet-ups that cater to your focused interests. If you can’t find one, start your own. That’s a circle!

Find your people. Find your like-minded communities. If you benefit from your circle’s members, find a way to give back – you’ll soon forget that you’re “networking” at all.