What to do when you screw it up 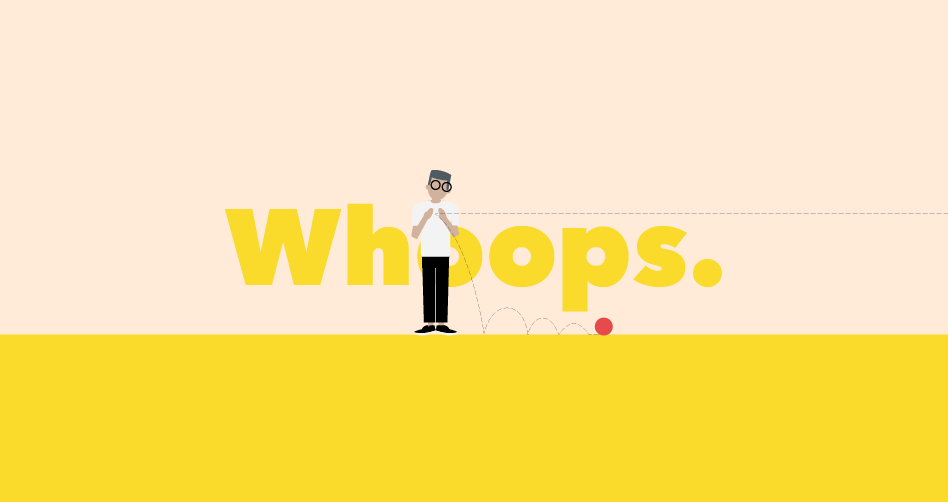 Once upon a time in the not-so-distant past, I was finishing up a short-term project for a client; let’s call him Mr. Cellophane (because, as you will see, I wrongly looked right through him, walked right by him). I was extraordinarily busy at the time, starting up a new gig and working on several complex projects simultaneously – and to be honest, the work I was doing for Mr. Cellophane paid on the low end of my usual rate and was, uh, kind of boring. Mr. Cellophane wanted some edits done on the piece I had written for his company – totally fine – and we spoke on the phone about some of them. On the phone, he said that he would send me a Word document with additional edits; I agreed to incorporate those, too. I was anxious to be done.

A day later, I turned in the final draft to good old Mr. Cellophane, along with a cheery thank-you email and invoice. Within minutes, I got an angry reply:

“What happened to the edits I sent you?!!”

The response I shouted at my computer is unprintable. In my general overworked state and rush to be done, I HAD FORGOTTEN ALL ABOUT THE EDITS IN THE WORD DOCUMENT.

Even the most detail-oriented freelancer, given a heavy enough workload and too many stressors, will occasionally mess up in the most spectacular fashion imaginable. We’re not talking about doing perfectly good work that a client dislikes, the times when client error trips you up, or even wandering into the normal, small errata that can pop up in any draft – we’re talking about a major faux pas.

So what do you do when you really screwed it up?

Oh, too late for that, am I right? This is more like the Invisible Preventative Step.

It’s easy to say it in hindsight, but to prevent super screw-ups, double- and triple-check your work before submission. We hurry, we skip this step, and thus made the mistake to begin with, but a nice fat mess reminds one to always review your work… even if you’re exhausted.

Okay, so we both skipped Invisible Step 1. The mistake is made. Now what?

Take a step back and calmly assess the extent of the error. Did you catch it first, or did the client? If you caught it first, you’re still in the clear. Alert the client immediately, and send the corrected version of your work ASAP. You may even tell a teensy white lie at this stage:

“Oops, I accidentally sent you the draft version of this design! Please pardon me. Attached is the correct version.”

Wipe your sweating brow – you probably got away with it this time, Captain Sneaky. Revert to Invisible Step 1 for all future projects.

If the client caught the mistake first (as in the case of the justifiably irate Mr. Cellophane), curse your fate and then calmly analyze the situation. Try to put yourself in the client’s shoes; how irritated would you be? Is it a small mistake (you misspelled a key word or two) or a huge mistake (you misspelled the client’s name throughout your design)? How long will it take to fix, and how much of it is actually your fault?

Yes, you screwed up, you bad, bad freelancer! Now be professional about it; apologize sincerely, but don’t rationalize your screw-up too much. Odds are they’re not particularly interested in excuses – they want it fixed.

In the case of Mr. Cellophane, I said:

“I’m so sorry – in the course of our conversation, I forgot to note that you specified further edits. I’ll add those right away; I apologize again.”

Nice, neutral phrases that express the nature of your screw-up include: “I’m so sorry, that was an oversight” or “I’m so sorry, I misunderstood.” Obviously, you want to avoid being defensive or using inflammatory language and offending the client further, but you don’t need to abase yourself completely. Even admitting that I “forgot”, in Mr. Cellophane’s case, was risky – but I was in a corner, since I had so obviously, uh, forgotten.

4. Focus on the Solution

This is almost exactly what you do when your client dislikes your (good) work – with a few key changes.

As I’ve said, the client probably doesn’t want to hear much about your excuses; instead, propose a specific plan to fix it. Include timeline, because the last thing you want is to let them stew about sitting around, waiting for you to correct your mistake:

“I’ll have the corrected draft to you (including those edits) by 2 PM.”

Proposing a solution will often calm the client down quickly – especially if you follow up with particularly good work (and you will, because you’ll be on your toes). But it also, sneakily, sets boundaries; you’re not promising to do fifteen more drafts until you get it right – you’re promising to fix your mistake.

Most of the time, the proposed solution will be enough. Occasionally, however, you get a client who is very upset indeed – and you may be tempted to use what I call “the nuclear option.”

The nuclear option is only to be used when your financial stakes are relatively low, the client is truly irate, and you’re pretty sure they can be trusted to pay you. I’ve only used it once before, but I ended up using it with Mr. Cellophane. While he was not a top-paying client, he knew people I worked with regularly – and thus could affect my reputation. I also felt genuinely awful and guilty that I had de-prioritized his project. In the nuclear option, you gamble taking a financial fall for client satisfaction. For example, I said:

“[Mr. Cellophane], I completely understand why you’re upset. Tell you what – I’ll make those edits, and send you the new draft. If you don’t like it, you don’t have to pay me for any of the work I’ve done.”

The nuclear option, as its name implies, is to be used very rarely. Again, only use it with clients who are trustworthy, because a less-than-ethical company could take your work, use it, and not pay for it at all!

Used correctly, the nuclear option is, however, effective when used with clients who can be trusted. After all, if they hate the corrected work, odds are you weren’t going to get paid any time soon anyway – so you’re really just promising that they’ll be LESS unhappy with the new draft.

5. Keep it in Perspective

Unless you’re a freelancer working on anti-nuclear proliferation treaties (in which case, get back to work!), odds are your mess is not the end of the world.

Try to move on as graciously as possible, and learn from your mistakes. You’ll live, and so will the client. I’ve assumed, throughout this, that your client has not used abusive language or bullying tactics to “punish” you – if they have, get a new client. You don’t deserve that, no matter your errata.

In my case, even Mr. Cellophane softened and forgave me – and was ultimately pleased with the project. I think, by the end, he had almost entirely forgotten about the snafu; it was slightly more memorable to me, drowning in a pool of my own sweat and regret.

Keep in mind, we all make mistakes… and always, always double-check!