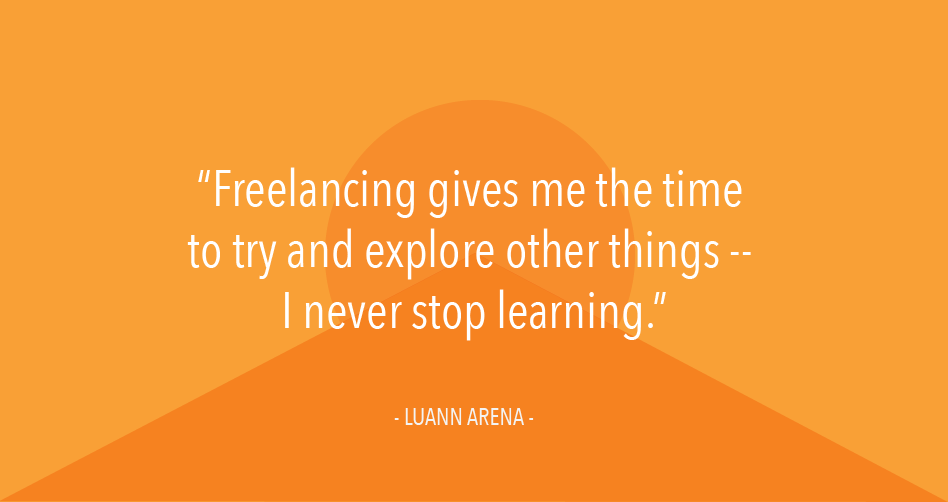 Want to know what 25+ of freelance freedom looks like?

LuAnn Arena is what you might call a lifelong freelancer. Except for a short stint at a bank -- “working for the man wasn’t for me,” LuAnn says -- she’s been a freelance musician, artist, web designer, consultant, logo designer, and founder of FunkyKittyProductions.

So what did LuAnn learn while getting all these different projects off the ground and keeping them going?

First, understand why you’re freelancing in the first place.

Freelancing has always been the only career option for LuAnn.

“I watched my dad go to work everyday and and he was never happy. I didn’t want to live like that,” LuAnn says.

FunkyKittyProductions gives her the flexibility she needs. “Freelancing gives me the time to try and explore other things -- I never stop learning things. Right now I’m taking a calligraphy class because I want to incorporate that into my work. That’s not a part of your typical job.”

Freelancing also gives LuAnn control over who she works with and what she’s doing. “I never work for anyone that I don’t respect. That is not something you can usually say.”

Your career will change depending on your stage in life.

LuAnn spent almost all of her twenties pursuing a music career that took her around the country as both an independently touring musician and a member of a children’s musical group.

“Right after I realized working for the man wasn’t for me, I did a semester of college but just couldn’t stick with it. It just wasn’t for me at the time; I wanted to play music so that’s what I did - what I loved.”

But after nearly 13 years in the music business, she decided that she wanted more stability. She went back to school, attaining a degree in fine arts from SUNY New Paltz in New York State.

Transitioning between freelance career tracks is a challenge. Internships -- even later in life -- can help.

After years on the road working as a musician, learning to freelance primarily as a visual artist was hard at first.

“At the beginning it was definitely not easy,” she recalls. “I took internships to help me figure things out. That was the best thing that I could have done at the time.”

Internships allowed her to focus her future efforts. “At the time, I wanted to explore the area and broaden my own working knowledge on something I knew nothing about and just get some job experience in general. I was really lucky because it worked out - I learned a lot!”

“I was doing work for a friends boyfriend and, oh man…let’s just say that after that, I knew I would always need to have a contract in place, signed beforehand, that gets all of the payment details in order. That way there’s no hard feelings or unnecessary stress for anyone when it comes time to submit things or get paid.”

A routine is good for your sanity.

Another of LuAnn’s biggest challenges is structure -- or the lack there of. When you’re working primarily from home or not in a traditional office setting, you have to be your own taskmaster.

“I started off having no set routine. I’d find myself just walking around the house, doing all sorts of random things. Now, I’m very strict with myself. Everyday I get up, do some yoga, get dressed in “real” clothes, and then sit down to really work during my office hours (from 10-4pm, Monday through Friday).”

Work hours are something that LuAnn really tries to respect for her own sanity.

“As a freelancer working from home, you can literally work all of the time because it’s always there; it’s just never not there, looking at you. Then you have clients who will just contact you whenever they want because they know you’re a freelancer...it can get complicated.”

Her solution to this has been simple: she very clearly states at the front of all her contracts when her office hours are, and that’s when she can be expected to respond unless something truly terrible has happened.

Having her own set hours for work ensures that LuAnn has plenty of other time to explore her other interests.

You are not one thing -- your job title doesn’t need to be either.

LuAnn thinks of her freelance life as bridging multiple parts of her personality. As her career has developed, she’s taken greater efforts to consciously couple her work and passions together.

“I really had to break it down mentally first; I had to just stop putting boxes around things as "work" or "play" and learn to think of them as the same thing,” she says.

LuAnn works to find the time to work with and promote local businesses (she prefers working locally and doing sustainable design), writing and performing her own music, and learning how to do hand lettering, water colours, and ink drawings. Her goal right now is to get good enough at handdrawn art to get commissioned work.

Living in Asheville amongst a community of other freelancers, LuAnn feels “really lucky right now” in terms of how her life is going.

“At the end of the day, I think I’m doing alright as a freelancer. I really don’t know what else to be.”