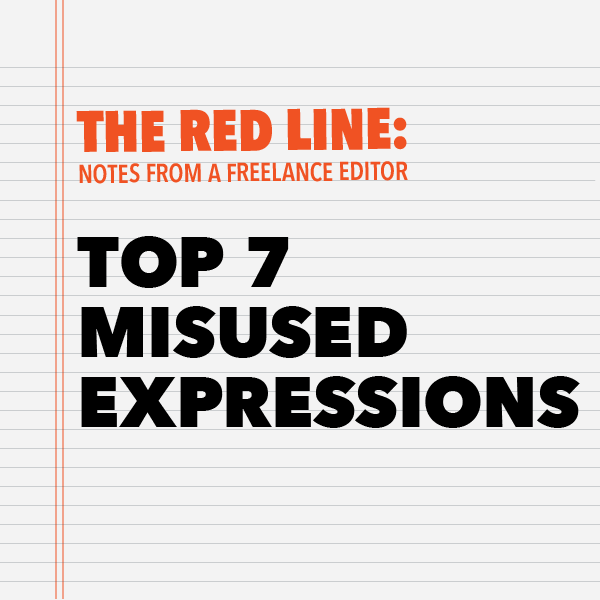 I’m a freelance digital audience development manager; a lot of my work depends on getting people to concur with what I’m posting on social media. Lately, I’ve been seeing some commenters writing “Here, here!” on my posts. This looks wrong, as if they’re children jumping up and down, trying to get my attention. Is it “Here, here” or “Hear, Hear”?

I’m so glad you asked this question; I’ve been dying to write a post on commonly misused phrases. Thanks for giving me the excuse; here are seven of my favorites, starting with your question!

“Hear, hear!” (short for “Hear him, hear him!”) is a phrase from Parliamentary proceedings; it means “listen up, I concur with what this person is saying.” “Here, here!” is nonsensical - or, as you point out, looks like something castaways would say when waving at a rescue plane: “Down here! We spelled out ‘HELP’ with coconuts, and we’ve already eaten Fred!*”

Your Freelance Editor did NOT know this one until recently; I got into a long argument about its usage, insisting that I was right until I looked it up. I’ve been saying it wrong for decades. The original usage is “another think coming”; despite its faulty structure, it’s half of an old comical saying: “If that’s what you think… you’ve got another think coming.”

3. I couldn’t care less
Not: I could care less

This one first appeared in the 1950s, and has been regularly mutilated ever since. Think about it logically; you are saying that you are INCAPABLE of caring less – meaning that you are already at your nadir of sympathy.

This phrase actually dates back to the 1500s, from an act espoused by the wife-switchin’ Henry VIII. “For all intensive purposes” is just official-sounding gibberish.

“Champing at the bit” is what a horse does when impatient or bored; the horse chews the bit (a piece of metal attached to the bridle) in its mouth. “Chomping at the bit” suggests a literal biting of the bit, which is idiomatically a bit mixed-up.

Your Freelance Editor never heard “on line” before she moved to New York City, and at the risk of irritating 8+ million people, she’s going to have to agree with The Times Style Guide – this is a regionalism. It’s “in line”; I still love you, New York!

7. By accident
Not: On accident

We’re probably doomed to lose some of these grammatical battles eventually; “on accident” is becoming more and more common, especially amongst younger people. “By accident” is the more common usage, so I’m going to make a call – stick with “by.”

The good news, Letter Writer, is that your commenters are trying to agree with you; the bad news is that they are a bit confused; their usage of “here, here [sic]” suggests “look, look” rather than “listen, listen.”

This has been a message from a Freelance Editor.