Literally the most important post about the word literally 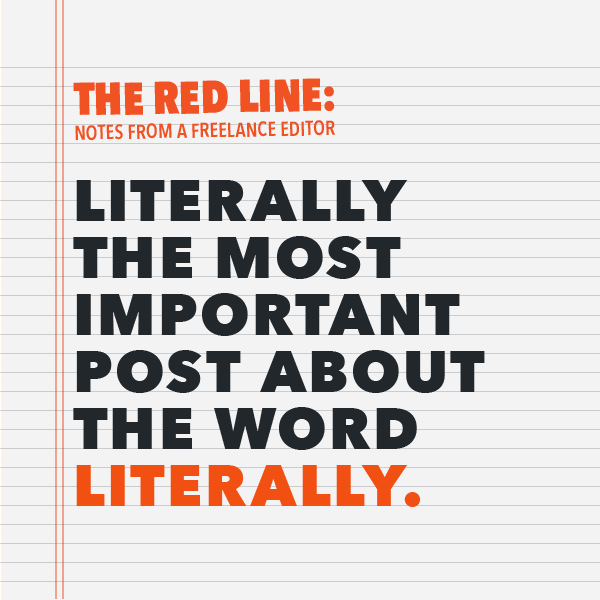 My roommate and I are both freelancers, and we spend a lot of time working from home. Co-working has been fine, until recently.

She is literally driving me nuts, because she keeps insisting that I am misusing the word literally. If I get one more passive-aggressive comment about it from her, I am literally going to scream.

Please tell her that she’s wrong.

This is one of those questions that forces your Freelance Editor to go down the etymology wormhole.

Buckets and buckets of editorial blood have been spilled over this issue. A few years ago, The Oatmeal published a rant against misuse, which popped up on my Facebook feed approximately eight million times (I betcha a nickel that it also gets posted in response to this article). In the post, the author argues that “literally” only means “exactly – without exaggeration.”

Thus, if you say that you are “literally dying,” someone should call an ambulance, because you are not long for this world.

The Oatmeal’s author is not wrong – the original definition of “literally” is “exactly, not figuratively, allegorically, etc.” But the tradition of using the word “literally” to denote an exaggerated emphasis is CENTURIES old, reaching back to the 17th century.

Jane Austen, Mark Twain, F. Scott Fitzgerald, and James Joyce were all great geniuses. And they all, technically, misused “literally.”

English is a heckuva language: promiscuous and undiscerning, it indiscriminately steals from other tongues and endangers its own sanctity at every turn. It constantly mutates and evolves, and pays no heed to the anguished wails of purists.

That is why, according to Merriam-Webster, “literally” now has TWO seemingly-contradictory definitions:

So where does your Freelance Editor land on this issue?

Thanks to a rich tradition of misuse, “literally” can now also be used for emphasis, at least in informal usage. Howl all you want, purists! You can’t fight this inexorable force! Submit to the tide of times!

Congratulations, letter writer. You’re not wrong; your roommate is wrong.

You may indeed use “literally” to indicate an exaggerated, or hyperbolic state. But use it sparingly – your letter indicates a tendency to pepper every phrase with the word.

Literally nobody likes a serial exaggerator.

This has been a note from a Freelance Editor.