Why are we working more for less? 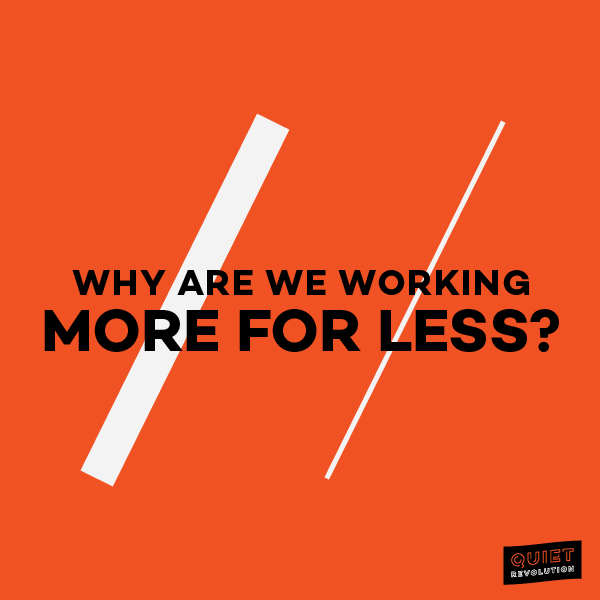 A lot happened in 1974: Nixon became the first U.S. President to resign following the Watergate Scandal, the Sears Tower in Chicago became the world’s tallest building, and the largest series of tornadoes in history (148 to be exact) hit 13 states and 1 Canadian province.

But something else happened in 1974 that has affected the lives of Americans every year since, and might be able to give us some insight into what Freelancers Union founder Sara Horowitz is calling the “Quiet Revolution”: We started working more for less.

After World War II, the American economy prospered. As productivity (the amount of product produced divided by the amount of time or cost it took to produce it) increased, so did wages.

The economy also operated on a far more egalitarian basis; in the period between 1947 and 1974, the income of the poorest fifth of Americans rose 42%, while the income of the wealthiest fifth rose just 8%. During this same period, productivity rose 97% while wages increased 95%.

In short, everyone was making more for working more, and the poorest among us were benefitting most of all.

Since then, a lot has changed. In 1974, the median household income fell by $1,500 -- a 2.1% decrease in wages. It may seem like a mild slump, but it was only the beginning. According to American Prospect, in the past 27 years, productivity has risen 80% while median compensation has risen by just 11%.

This divergence in productivity and wages means Americans are working much harder than they used to, and wages have not caught up. Meanwhile, low-wage jobs have become scarcer, employment has become less secure, and benefits have been cut.

Is it any wonder that traditional 9-5 work is becoming less appealing to many Americans? Working more for less and being at the mercy of job cuts never did make for a happy employee; it’s no wonder that 8 in 10 Americans report being stressed about their jobs and hypertension is on the rise.

It also explains why spending for the richest 1% has risen 17% since the end of the recession, while it’s only increased 1% for the rest of us.

So how did we get here? What were the major factors that led to this divergence?

In a report for the Economic Policy Institute, Lawrence Mishel argues that declining union involvement has had a significant impact. Unions tend to represent predominantly lower and middle-wage, blue-collar, and high-school educated workers and have historically served to raise lower and middle class wages. Therefore, the decline in unionization (13% of workers are now in unions as opposed to 27% in the 1970’s) has hampered union’s ability to accomplish many of their historical goals, such as bargaining for middle and lower-class wages and improving working conditions and comprehensive benefits. The decline in unionization has made it so that non-unionized companies no longer feel pressured to keep their wages competitive with unionized companies. As Mishel explained for the New York Times, “there are no standards being set, so companies can push down on wages for all workers, union and nonunion alike.”

In his column for the New York Times, Paul Krugman supports Mishel’s theory, explaining that the shift of income from labor to capital, and the inherent shift of labor income away from the middle to the top has been primarily responsible for the divergence. In other words, overall economic stagnation is not necessarily a reflection of income stagnation, but a reflection of increased economic inequality. In his view, had inequality not soared over the last 40 years, the income level for the typical worker would be 30-40 percent higher today than it is.

Surely, each of these factors contributed to the divergence in their own unique ways. Still, the most direct cause of the divergence may be a combination of job outsourcing and new technology.

Globalization has resulted in a bidding war of sorts between countries for cheap labor. This race to the bottom has sent traditional American industries overseas, as we are unable to compete with the cheap labor practices of other countries (http://www.economicshelp.org/blog/6485/economics/wages-declining-as-a-share-of-national-income/). At the same time, as robots and computers fulfill more traditional factory jobs, fewer workers are necessary and payroll expenses have been drastically reduced.

In short, as MIT Economics Professor Erik Brynjolfsson pointed out for the New York Times, “there is no economic law that says technological progress has to benefit everybody or even most people. It’s possible that productivity can go up and the economic pie gets bigger, but the majority of people don’t share in that gain.”

The truth is, workers have been quietly pushed around for almost 40 years. And getting back to pre-1974 wage fairness seems like a tall task.

This trend may be at least part of the reason many Americans are interested in entering the independent workforce -- they want to take back control over how much they work and own the full product of their efforts. As an independent worker, you might be working yourself too hard, but at least you’re doing it of your own volition.

Since the recession ended, spending for the rich has gone up 17%, but only up 1% for the rest of us. This seems to suggest that when people don’t have a lot, they tend to think more about what they can have. We’re now seeing people actively choosing to consume less. American workers want better consumption, not just more and they’re taking matters into their own hands and writing the next chapter in the American economy by building a more sustainable future together. The Quiet Revolution has begun.