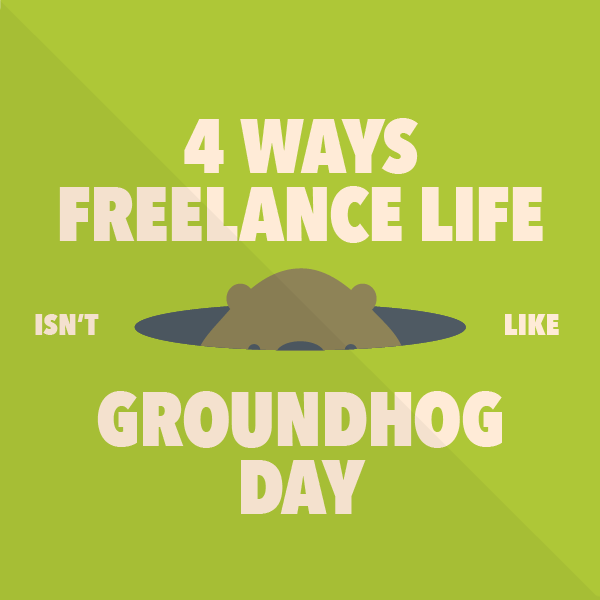 In celebration, I’ve decided to take a look back at the classic film. Sure, none of our lives are exactly like Bill Murray’s character Phil Connors, but if you’ve worked a 9-5 you know that it can sometimes feel like an endless time loop. Check out these ways freelance life is unlike Phil Connors’ and congratulate yourself for living a very un-Groundhog Day-like existence:

Certain jobs can be just as monotonous and repetitive as waking up to cover the Groundhog coming out of his hole each year (maybe worse). Lucky for you, that’s not the case. You’ve broken out of the 9-5 grind and created a life that works for you, doing work that you’re passionate about.

Think about it: If you had been sitting next to Phil Connors at the bar when he asked, “what would you do if you were stuck in one place, and every day was exactly the same, and nothing that you did mattered?” You would have been able to proudly respond, “Phil, I don't know what you're talking about. I quit my job years ago.”

2. You can wake up however, whenever you want

You work for yourself, so you have the luxury of not having to wake up at the same time every morning to commute to the same destination. Remember that exhausted look that Phil Connors had every time Sonny & Cher came on his radio at 5:59am? Well, you’re not on the groundhog’s schedule, so you can sleep in to your heart’s desire. Heck, I’d bet that a lot of you tend to work until close to that time anyway, don’t you?

And remember, if you do set an alarm, you are not required to wake up to the same song every single day! “I’ve got you Babe” might be good for a day or two, but I’d recommend changing it every once in a while.

Phil Connors went a bit overboard when he punched old Needle Nose in the face, but we all know how he feels. Remember, embracing Ned made him go away AND helped Phil escape the time loop that he was trapped in.

It reminds me of something we’re all pretty familiar with: networking. There are always going to be difficult (or just plain annoying) people working in your industry. Regardless of how they might make you feel, remember that they’re freelancers too. Just like you, they work for themselves, they have to find clients, they deal with freelance dry spells, and the rest of it. Chances are you have more in common than you might think. You also never know if they might have a gig recommendation for you.

So, next time you see your own personal Needle Nose Ned, be nice.

4. You need to take care of yourself

One of the only drawbacks to being stuck in a time loop is that your habits and diet can catch up to you if you’re not careful. Whereas Phil Connors could eat, smoke, and drink to his heart’s content, you’ll need to be a little bit more careful. Remember, regular exercise has been shown to make you happier and smarter, relieve stress, combat depression, improve learning, and improve self-image. Phil Connors could have used a bit of each, don’t you think? So remember to take a minute out of your day to take care of yourself