How to Start Subcontracting 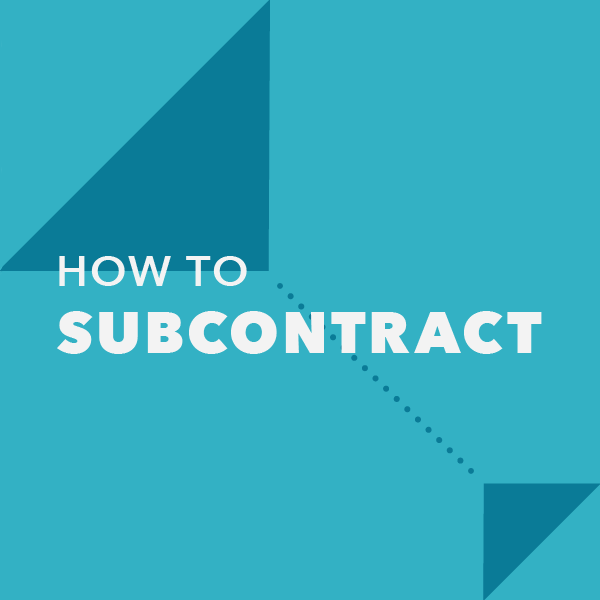 You’ve hustled, established a name for yourself, and have consistent work coming in. You’re now face-to-face with a problem you never believed could actually be a problem: You have too much work.

You could handle all of the work you now have, but it would mean turning down all of the jobs you’ve just been offered and….you know….probably never sleeping again.

Maybe you can deal with not sleeping for a while, but you should never have to turn down a good job just because you’re too busy, sick, or don’t have some of the required skills. Lucky for you, there are a lot more freelancers than there once were. Why not help them help you by subcontracting one (or two or three) of them?

But before you start subcontracting, there are a few things you should know. Follow these 5 simple rules, become a subcontracting professional, and never turn down a job again:

There are certain things that only you can do. These are the nuts and bolts of your operation. You know them, your business is built on them.

At the same time, there are a lot of things that a number of other people can do.

Make a list. Break one project down to its basic components and determine which parts should be assigned to others. What parts could be done better, faster, or with more patience?

Next, decide on how much recordkeeping you’d like to do. Keep in mind that if you pay someone with any degree of frequency, you might have to do tax-related paperwork.

Whether you simply want to establish a network to cover you in case of emergency or you’re interested in eventually building a team, subcontracting is a good thing to consider.

You’ve been freelancing long enough to know that networking is part and parcel of the freelance lifestyle. Of course, there’s always room for improvement, but if you have an established network you’ve already done the footwork to start bringing others onto your team.

Much like a doctor, you should always have at least one trusted person on call to help you when you need it. Maybe you already have someone that’s done smaller gigs for you or vice-versa. If you haven’t, it’s good to start small. You don’t want to entrust a big, important subcontracting job to someone that you’ve never worked with before. The size of the job and the trust you have with this person should increase in tandem.

The ideal is to end up with a network of trusted freelancers with good work ethics, attitudes, and high skill levels that you can call on when you need them.

You’re your own boss, but once you’ve started subcontracting, you’ll now be functioning as someone else’s boss as well. You’ve dealt with bad clients. It was a horrible experience. So don’t be like them!

First, you’ll need to be clear about the assignment. What are the exact deliverables? When is it due? What is the price-range that you have in mind?

Once the project has begun, you’ll want to check in with your subcontractor, but don’t be a micromanager. The client doesn’t need to know about the subcontractor’s involvement, but being that their work will reflect on you, it’s crucial that you’ve done the legwork to ensure that your subcontractors are professional and dependable.

Set the objectives, make sure they are crystal clear on the details and deadline of the project, and let them do their thing.

4. Learn to Speak Legalese (or Hire a Lawyer)

Whether you’re about to start subcontracting or you’re a subcontractor yourself, having a written agreement is crucial. Lucky for you, Freelancers Union has a contract creator to get you started.

At the same time, if you plan to subcontract regularly, it might be a good idea to hire a lawyer. That way, you’ll be sure that all of your bases are covered and it will be one less thing to think about (because we all have far too much to think about already).

In The Freelancer’s Bible, Sara Horowitz suggests that the following be included in your contract:

5. Get a Subcontracting Budget in Order

Before you begin subcontracting, you should begin budgeting for it. Put money away specifically for your future subcontractor so that when you need them, you have the cash.

What tasks are you subcontracting? For how long? All of this will determine how how much you should set aside. One of the primary reasons that you should begin subcontracting is to allow yourself to take on more work so it should all pay for itself in the end.

Freelancers, what do you think is the most important thing to know about subcontracting?