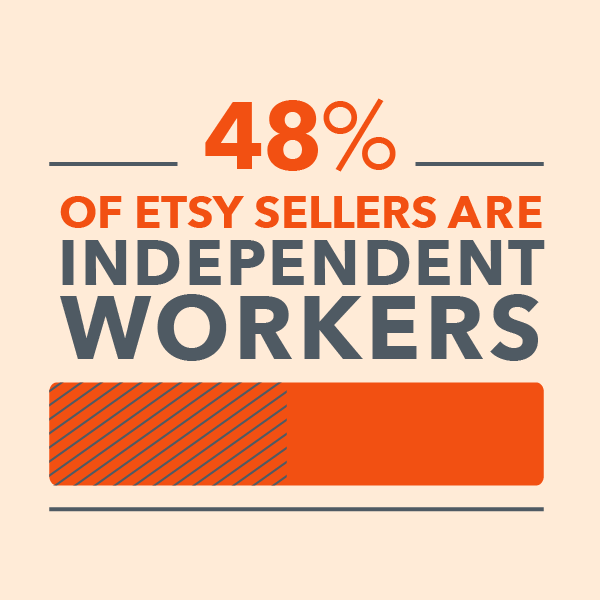 It’s true. In a report released last week, Etsy reported that 48% of their sellers were freelancers. Together, they generated over $895 million in sales last year.

Etsy sellers have joined the millions of other independents changing the face of the workforce and our economy. Whether sellers use Etsy to get side income or do this “gig” work full-time, they’re part of a growing movement of workers using new technology to turn their ideas into (extra) profit.

We call them freelancers. But no matter what you call Etsy sellers, it’s simply exciting that people are finding new outlets to supplement their income and taking charge of their own work.

Here are a few of the study’s more interesting stats:

The report already has its share of detractors. A recent article on Slate.com argues, “Etsy says its crafters are ‘thinking and acting like entrepreneurs,’ but they’re not thinking or acting like very effective ones,” pointing to the fact that the average Etsy seller makes $44,900, below the national average. They add to this that the report is “suggesting they invest more in poorly-paying hobbies.”

The writer fails to see is that not every Etsy seller is intent on the brand of success that he defines. Her argument hinges solely on Etsy seller’s income. It doesn’t take into account the fact that more Etsy sellers are motivated by creativity (81%) rather than income (68%), and many sellers (like stay-at-home parents), would not receive any income without their Etsy businesses.

Freelancers added an estimated $1 trillion to the US economy in 2012, according to MBO Partners. Rather than criticizing the legitimacy of these people based on their income, why not celebrate what they’ve achieved?

Freelancers are estimated to account for 40% of the workforce by 2020. The indie economy is here and it’s important that Etsy sellers, for example, are not regarded as hobbyists, but contributors to the shape of the future economy.

Do you sell items on Etsy? If so, do you consider yourself an entrepreneur?

What to do if you're losing freelance work, with Jason Montoya

Build a sales pipeline to bring in more clients