4 Things All Freelancers Can Learn From Bill Watterson 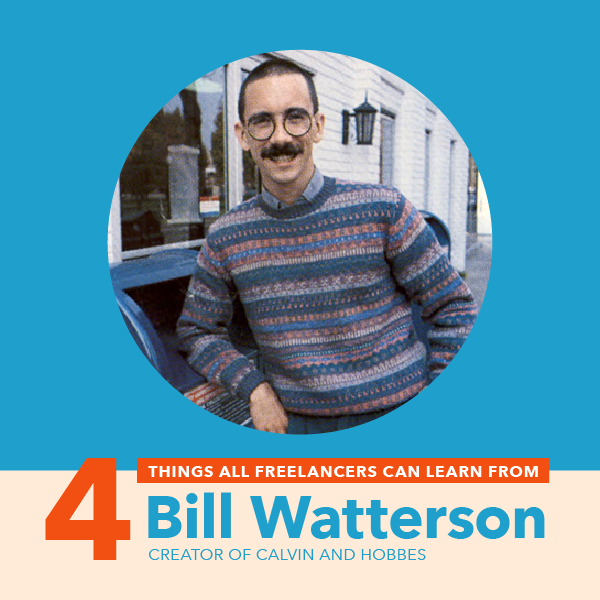 Whether you know them by name or not, you’ve seen Calvin and Hobbes. The six-year-old Calvin and his stuffed tiger Hobbes have become two of the most recognizable comic strip characters of all time.

Bill Watterson, the creator and artist behind the comic strip, didn’t achieve fame easily. Like most artists and writers (who are often freelancers), he had to push through dark moments where quitting his art and getting a “real job” actually seemed like a good idea. We’ve all been there, haven’t we?

Timeless characters like Calvin and Hobbes don’t just happen, they’re based on the experiences of their creators. Here are 4 things that all freelancers can learn from Bill Watterson:

1. Never stop doing what you love, even if no one else loves it

After graduating from Kenyon College in 1980, Watterson was given a 6-month trial gig at the Cincinnati Post as a political cartoonist. They fired him after a few months.

Broke and fresh out of college, Watterson had no choice but to move back to his parents’ house. This is about the time some people would have given up on their dreams, right?

Soon he began working for a “soul-sucking” ad agency, but spent his off-time drawing comics and submitting them. For four years he worked a job he hated, but never stopped working at his art.

“The only way to learn how to write and draw is by writing and drawing … to persist in the face of continual rejection requires a deep love of the work itself, and learning that lesson kept me from ever taking Calvin and Hobbes for granted when the strip took off years later.”

2. The pursuit of happiness isn’t easy, but you’re the only one that can do it

In his 1990 Kenyon College commencement speech, Watterson urged graduates to figure out what success meant for themselves, and not let the world define it for them.

Success is not just a job title and salary, he argued. He referred to real jobs as those that you “don’t care about what you’re doing, and the only reason you’re there is to pay the bills.”

Giving yourself more time to pursue hobbies and take care of your family doesn’t make you a “flake” or unambitious. You have the choice to break out of the “success is money” mold. Even after becoming a success, Watterson put his cartoons aside in order to spend time with his family and his more neglected hobbies.

As freelancers, we understand the pressure that comes from pursuing our individual passions. Although the freelance workforce is growing and the nature of work is changing, pursuit of the work/life balance is still considered by many as an impossible dream. Watterson proved that it’s not.

He closed his commencement speech by saying, “to invent your own life’s meaning is not easy, but it’s still allowed, and I think you’ll be happier for the trouble.”

We think he was onto something.

Watterson didn’t like the one tier, 3-4 panel, black-and-white template of newspaper comic strips. He felt that it restricted the artist’s ability to tell their story.

After working within their confines and establishing himself a bit, he decided to push back.

Not only did he propose a radical new layout for his color sunday strips, he adopted a “take it or leave it” policy: If newspapers wanted to print the Sunday Calvin and Hobbes comic strip, they would only be allowed to print the half-page comic as it was submitted to them. If they wanted to edit it, they could find another comic to run.

His audacity paid off, and a majority of newspapers accepted the change in format. This led to one of the more exciting periods in his creative life, as he could now present the comics as he had imagined them.

“The last few years of the strip, and especially the Sundays, are the work I am the most proud of. This was close as I could get to my vision of what a comic strip should be.”

4. If you no longer have a story to tell, don’t tell one

Calvin and Hobbes was syndicated from 1985 to 1995. Watterson had fought his entire life to make these characters a reality, changed the way comics were printed, and ended up with one of the most successful and timeless comics of all time. Why would Watterson stop writing a comic at the height of its popularity, sacrificing millions of dollars in future revenue?

Watterson’s answer: He didn’t want to “sink into half-hearted repetition.” In a letter to newspaper editors, Watterson explained his reasoning: “My interests have shifted...and I believe I've done what I can do within the constraints of daily deadlines and small panels. I am eager to work at a more thoughtful pace, with fewer artistic compromises.”

Since retiring Calvin and Hobbes, Watterson has remained largely out of the public eye and spends most of his time on painting and music.

You might think this is impossible for you, but it’s not. You don’t need to become famous to focus on doing the work you love. Build your client base, show them you know what you’re doing, build trust, then point them in a direction that fits your style.

Freelancers, how do you define success?