Freelancers, Let's Own The Next Economy 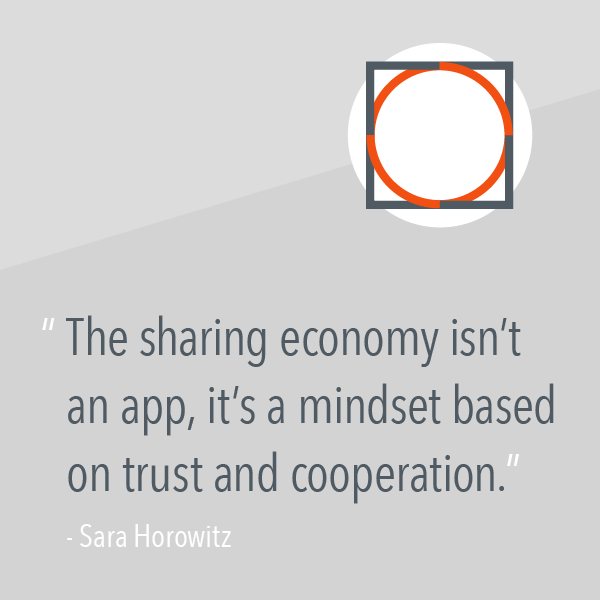 You are powering tomorrow’s economy and you might not even realize it.

Every time you rent a room on Airbnb, hail a car on Uber, or, um, share your leftover pizza on LeftOver Swap, you’re participating in a dynamic new economy that is changing the way we think of everything we own. It’s called the “sharing economy,” and it’s not only a new way of doing business, it may actually be the future of business.

But as our founder Sara Horowitz pointed out, every time the big brands make all the headlines, it’s easy to forget that apps, investors, and regulators aren’t the real story.

All of these things are done thousands of times a day, all over the country, by independent workers -- a group of people who own and rent their own assets, set their own schedules, and file good-ol' 1099s. So stand up, freelancers: you are making tomorrow's economy happen today.

But there’s still more to the story.

This isn’t about new sharing platforms made in Silicon Valley, it’s about what we can build together. Sara said it best: “The sharing economy is a mindset, not an app.”

The sharing mindset is about trusting strangers. It’s about cooperation and working together. And it’s about making the most of what you have. It’s a worldview rooted in the same entrepreneurial spirit that fuels all independent workers. Everything you own can be rented out as a side gig as long as you have someone you can share it with. It’s capitalism served with a side of collaboration.

But the sharing mindset doesn’t just have to benefit a few people in Silicon Valley and Tribeca. Instead, we can take what’s at the heart of the “sharing economy” and work together to make a true positive difference.

Think this sounds like it can’t be done? Well, guess what: people are already doing it. And we’re going to be featuring more of those people on this blog.

The sky's the limit. These social changes aren’t just on the horizon, they’re already happening. The way the entrepreneurial community of Detroit has responded to the city’s woes is a great example.

The sharing economy is redefining how business is being done, and independent workers are a major part of the equation. We now live in a world where anyone with a smartphone can have an instant side gig, and that’s a good thing. Not only is the entrepreneurial spirit alive and well, it’s becoming commonplace.

Now let’s take it to the next level.