On Our Own Together: 2012 is proof #WeAreWhatWeNeed 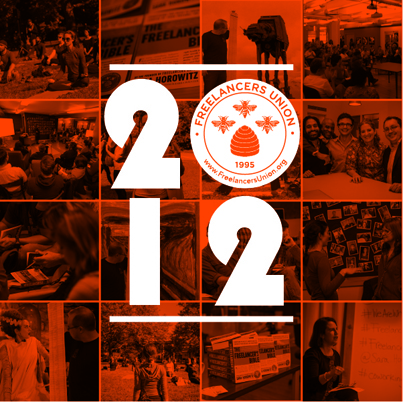 2012 was another busy year for Freelancers Union. From the launch of the first freelancer-focused health program to sharing career insights and fighting back against deadbeat clients, Freelancer Union members continued to come together to help build and support innovative solutions that take on the issues we all face as freelancers.

Here’s a quick recap of a few milestones for freelancers this past year:

This fall, in the heart of Brooklyn, the doors opened on the first primary care practice just for freelancers. The practice is dedicated to members of Freelancers Medical, an innovative program that provides progressive care and addresses health needs that are unique to freelancers. What’s next? Freelancers Union is working to sponsor and launch nonprofit healthcare plans in Oregon, New Jersey, and New York in 2013.

We announced that we've hit a major milestone: there will be no increase in your insurance premiums in 2013. At a time when most insurance companies are raising rates 10 percent or more, we have worked with enrollees and partners to keep rates as affordable as possible.

Sara Horowitz Appointed to Board of the New York Fed

The Federal Reserve Bank of New York officially announced Sara Horowitz’s appointment to its board of directors. As the body that sets monetary policy and regulates the banking system, the Federal Reserve and its actions affect each and every one of us – no matter what our views. Now we have the chance to help shape its decisions.

Yoga in the Park

To celebrate the launch of the Freelancers Medical program, independent workers came together to connect, breathe, and find a moment of solidarity in the sun. Yoga events in McCarren Park and Prospect Park in Brooklyn, NY, attracted over 200 people who joined us to experience some outdoor yoga Zen and network with fellow freelancers.

Thanks to the expertise and experiences shared by solopreneurs nationwide, Freelancers Union founder Sara Horowitz released her first book, The Freelancer’s Bible.

Sara spent the month of November visiting coworking spaces across the country to lead a series of conversations where freelancers were able to connect and discuss what it takes to make freelancing a more sustainable career and lifestyle choice.

Unfortunately, chances are good that at least one client has stiffed you out of hard-earned cash. In April, we launched The World’s Longest Invoice, to give freelancers a space to raise awareness of this common issue. In just one week, thousands of freelancers showed just how many people this affects – and that they’re still owed over $15 million for their work.

It’s been a great year and we will carry the momentum into 2013 and continue to prove that #WeAreWhatWeNeed to build the solutions to meet our common needs.