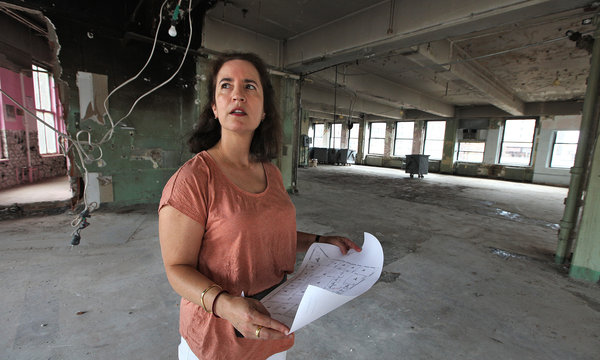 As part of the New York Times' Sunday Routine feature, our founder, Sara Horowitz, took a reporter to the site of the soon-to-be-open, freelancer-focused, primary care practice in Downtown Brooklyn.

The practice will serve only Freelancers Insurance Company members.

We're expecting the practice will open in early November -- and it will be a place where your health care is really about you. Lots more info to come over the next few weeks.

Here's an exerpt from the Sunday Routine feature:

Sara Horowitz, 49, the founder of the Freelancers Union, has a commitment to workers’ rights that runs several generations deep: her paternal grandfather was vice president of the International Ladies’ Garment Workers’ Union, and her father was a union lawyer. She received a MacArthur Fellowship in 1999. Ms. Horowitz, who grew up in Brooklyn Heights, lives in a brownstone in Park Slope with her husband, Peter DeChiara, 47, a lawyer whose firm represents unions, and their daughter, Rachel, 12. Like many of the freelancers whose champion she has become, she mixes work and home life on Sundays.

EARLY RISING I wake up around 5 every day, and I always eat exactly the same thing for breakfast: quick-cooking steel cut oats, made with water, almond milk, flax seeds, sunflower seeds, bananas and crushed almonds. That recipe was perfected over many years. I’m a flexitarian. I started changing my diet for environmental reasons, but I’m not a zealot.

CHILDHOOD HABIT I really have to hope coffee is a massive antioxidant, because I’m in it deep. When I was a kid, my dad made breakfast: a quarter of a bagel and coffee. I’ve been drinking coffee since I was a kid.

STILLNESS OR WORKOUT After breakfast, I either meditate or go to the gym at the Y on Ninth Street. I love the Y with all my heart; I have a sort of “Hello” social group with all these men in their 60s there. All the people who are working on campaigns are at the Y; I do a little political networking.

DIVISION OF LABOR My husband is the big food shopper; I’m more the farmer’s market shopper. He’ll make sure there’s lettuce in the house; I’ll make sure there’s arugula. I go to the farmer’s market on Fifth Avenue. We spend enormous amounts of money on gourmet popsicles in flavors like avocado and lime, or beet. My daughter loves the chocolate crepes.

IN THE KITCHEN I hardly eat out. I’m a good cook and I like to cook. We don’t always eat the same things, though. We do a variation of what we eat for my daughter, or she cooks for herself. My husband will also make food to eat at work during the week. We’re all very nesty.

THE S.S. IKEA We like to go on the free Ikea ferry. We don’t actually shop there. I like the idea of Ikea making a contribution because they have all that beautiful land in Red Hook. You can get off the ferry at Wall Street and walk to the Governors Island Ferry.

**SITE VISIT The Freelancers Union is building a medical practice for independent workers, on Jay Street between Willoughby and Fulton. The demolition’s been finished. The idea is that it will provide integrated health care, including primary care, yoga and wellness programs. We’re partnering with the people Atul Gawande wrote about in The New Yorker. **

DINNER AND WORK We eat dinner at 6 every day. I’m not proud of this, but I circle back to my work after dinner to get done what I need to do. I start thinking about my week to get my focus together. I’m reading a lot of things and getting back to staff so we’re ready for the week.

CURRENT PROJECT We raised $340 million to start up three independent insurance companies for freelancers in New York, New Jersey and Oregon. They don’t start up for 14 months.

WINDING DOWN We all finished watching “The Bachelorette” together. We liked Arie best; we were very sad he didn’t get picked. Sometimes we’ll watch what we call a “dom-rom-com” — a dumb romantic comedy. Then it’s off to bed at about 9. Our daughter is starting to stay up later than we do. TREAT At the very end of the day I’ll have some dark chocolate. No comment on how much. It’s as good as meditation and coffee.